Brandon Block IS the Graduate 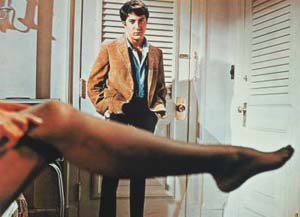 My son Brandon Block is The Graduate.
This spring he's graduated from Johns Hopkins University where he has done quite well and is now back home for a time over the summer.  I'm a little concerned, however, that he may be taking his role as The Graduate just a bit too much to heart.
Lately the kid's been kind of listless, mostly just lying around the pool and drinking beer.

"Brandon," I said, "what's going on?  It's perfectly understandable that a young man who's done excellent work might want to relax a bit, but you're taking this to extremes."

"I'm a little concerned about my future, Dad," said Brandon.

"I am, too," I replied, "especially considering we don't have a pool."

"Some guy at the graduation party suggested I go into plastics."

Brandon's odd behavior continued.  One day soon after, he walked into the kitchen with a startling announcement.

"I hope you won't be too shocked, Dad, but I'm having an affair with Mrs. Robinson, the wife of your business partner."

"Frankly, Brandon, I am shocked.  Because I don't know anybody named Mrs. Robinson, and I don't have a business partner!"

"Nevertheless, I'm having an affair with Mrs. Robinson.  It began one night in a hotel where I also had an amusing interaction with a desk clerk played by actor/writer Buck Henry."

Now I was really concerned!  I was so concerned I discussed the situation with my psychiatrist, Dr. Kropotkin, but what he said was not all that reassuring, especially when he asked me if I could get him Buck Henry's autograph.

Then came the bombshell.

"Isn't that kind of a half-baked idea, son?"

"No, it's completely baked."

"No, Brandon, I mean it's half-baked in that  She's a fictional character! None of these people are real, they're characters in a movie!!!

"Nevertheless, I am going to marry Elaine Robinson."

Two days later, I received a phone call that was the final straw.

"Who is this?  Dustin who?  I don’t know anybody named Dustin; nobody Jewish was ever named Dustin!”
Brandon did what?!  Disrupted Elaine Robinson's wedding and ran off with her?!!  He wants me to meet him where?!!!"

I sped to the address the man had given me, ran into the house, and incredibly there they all were: the late Anne Bancroft as Mrs. Robinson, the late Murray Hamilton as Mr. Robinson, the young Katherine Ross as Elaine Robinson, and even Buck Henry!

"Brandon, how is this possible?!" I exclaimed. "How can you actually be The Graduate?"

"Everybody's The Graduate at some time or other, Dad.   Life's like that.  And then we move on to another movie."

"Who knows? That's all part of the deal."

Brandon & older brother Brian, also a recent graduate from Fordham University with an MBA. Hard to believe I have such smart kids when I literally kept the Cliff's Notes company in business from years 1968 - 1972.

If you liked this post, you may also like The Cosmic Case of Role Reversal,  He's Leaving Home, Bye-Bye,  and Riding in Cars with Boys.  If you hated this post,  I hope you never get Buck Henry's autograph!
Posted by Perry Block at 1:06 PM

It's obvious, these young men got their good looks from their mother--probably their smarts too.

Congratulations, Pops. Perhaps they'll do well enough in the world that when it comes time to put you in a nursing home at least it will be one that doesn't smell of urine and has hot young nurses who like to play short-sheet Bingo.

Oh, but I love the smell of fresh urine in the morning. Hot young nurses? Watch the next post.

I want to congratulate you, Perry, on the most sensible, practical, and down-to-earth column. While I am not living inside the movie "The Graduate" I completely understand and sympathize with your son's firm grasp on reality. The film I live in now is "No Exit" and honestly, I wish they would do something about the color the damned doors are painted. My great fear is that since life is becoming more surrealistic every day, we might shift from movies into paintings. I have had frightening glimpses of several of Salvadore Dali's paintings and I sense that one day, one of these doors will open and we will be swept into a desert decorated with melting clocks...

Thanks, Ilil. I was trying to convey in the piece that life goes through phases and changes and it is up to each one of us to explore them. Sometimes it's like being in a movie which is quite different from one's regular life, but that's okay. As often in my pieces, Brandon is wiser and more understanding than I am and I'm sure he will take much better advantage of the movies that come his way than I did. I haven't seen or read No Exit but I can imagine what you're saying here about its effect on your life. However, no matter what movie my life may be at the moment I'm not looking for any exit yet. Well, here's hoping I get to play the love interest in a movie starring Scarlett Johansson and you get to be swept into a lovely painting by Renoir before somebody pushes us through it.

This comment method sucks worse than the old one, Perry.

Yes, you can't directly answer the comments by viewers like you, but all the comments seem to come through. What else sucks about it?