"Ever Notice?" or a Tribute of Sorts to Andy Rooney 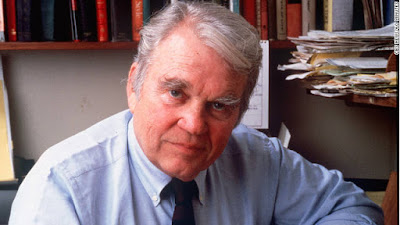 Ever notice that this post is nowhere
near as funny as it ought to be?


Amongst the ticking over the years was a crusty old gentleman (who was no doubt crusty and old even when he was 27) named Andy Rooney, whose humorous commentary on a wide range of subjects  used to appear in the final minutes of the show. Sometimes Mr. Rooney began his commentary with the words "Ever notice?"

"Ever notice that your morning coffee usually tastes better when you've gotten a good night's sleep rather than when you've drunken yourself into a  Dean Martin-sized stupor and awakened in Tijuana with a donkey in your bed?"

In memory of the late Mr. Rooney, I hereby present:

* How many people seem to be too young to remember Andy Rooney despite the fact that he was on 60 Minutes as late as 2011?

* How smart phones seem to be getting larger these days even though it’s generally the point of technological advancement that things get smaller and not larger, especially remembering how in Seinfeld cell phones and mobile phones used to be almost as large as Jerry’s head?

*That some people are constantly updating their Facebook photos in spite of the fact that most people get shittier looking as they get older which must mean that these folks want to be telling us "Hey, look how progressively less fuckable I'm getting?"

*That it is obvious that there is no such thing as time travel because no one has ever come back to tell us “Don’t worry, folks, Trump was impeached on March 8, 2018?”

*Everybody you know has kids who are superb in every respect such that you are constantly hearing “my Bruce graduated summa cum summa from Hot Shit University where he was editor of the campus newspaper, captain of the football team, and president of the Students Who Are Smarter Than Einstein Club and has a job lined up at Google where he’s going to be Head of Everything Important and this summer he’s tutoring children in a remote village in Gabon in English, math, social studies, and quantum physics,” and yet we have a culture in the United States such that we’ve elected an ignorant buffoon as president?

*That David Crosby is getting to look something like Ben Franklin with a walrus mustache?

*How we Baby Boomers fully understand and relate to the decades of the 50’s, 60’s, and 70’s but you could figuratively throw a blanket over the 80’s, 90’s, 2000s, and 2010s such that if a younger person says something like “That’s so nineties,”  we have no fucking clue what that means?

*That there are so many superhero movies and TV shows any more that it feels like we've been ripped off because we seem to live in a parallel universe where there are no superheroes and couldn't we at least have one superhero in our universe even if he or she has a lousy superpower, like being able to skip really well?

* That anybody who still supports Trump these days is the kind of person who would argue that Curly Joe was the funniest of the Three Stooges?

*How amazing it is that Jennifer Aniston who is not all that young doesn't realize that an iconic song for an entire generation like "All You Need is Love” does not belong in an eye drop commercial and that whoever approved her Eye Love commercial must be someone who's too young to remember Rooney Mara, let along Andy Rooney?

* That the same goes for "Werewolves of London" which is also being appropriated for some stupid ass commercial in which it decidedly does not belong?
.
*That actors who play illness sufferers in drug commercials usually do not appear in other commercials as totally different people who are completely healthy and having a great life because we would feel abused and betrayed that the person we were feeling so sorry for who was dying from Mishkin’s Disease is now eating Godiva Chocolates in Paris?

* How depressing it is how many people seem to be too young to remember Andy Rooney despite the fact that he was on 60 Minutes as late as 2011?

*That TCM is not quite as special without Robert Osborne, but we'll get over it?

*That when you know a heterosexual couple you usually like him and don’t like her or you like her and don't like him such that it would almost be refreshing if you hated them both?

*That your morning coffee usually tastes better when you’ve drunken yourself into a Dean Martin-sized stupor and awakened in Tijuana with a donkey in your bed rather than having gotten a good night's sleep?

Ever notice, dear Mr. Rooney, that as entertaining as you were, that last "ever notice?"

You finally got it right!

I never woken up in bed with a donkey, but some of my old girlfriends claim to have woken up with a jackass. But don't believe them. They don't know the difference between a mule and ruffed grouse.

Who gives a shit what happened in the eighties and beyond. Once disco came out, I lost all hope for the human race.

I can just see you doing one commercial as a painful hemorrhoid sufferer and licking a fudgecicle in the next, all the while rambling about how cool and soothing it is.

"Some of my old girlfriends claim to have woken up with a jackass." That would be a great line if it weren't so obviously true.

I care about what happened in the eighties and beyond because it's important to me to keep breathing in the beyond, I just can't distinguish what happened and when in that era. Whenever Justin Bieber came out can't have been a good time in the world.

"With Humira, remission is possible." Sure would like remission from all my health problems, not even counting the psychological and sexual dysfunction ones.