There was a Crooked Man and the RNC 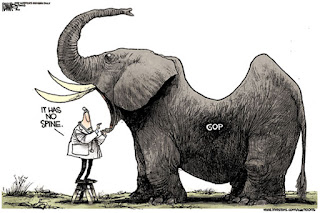 "Hello, is this the Republican National Committee?"
"Yes, this is the RNC. How can I help you?"

"Yes, well, my name is Perry Block.  I'm a life-long Democrat but I have a proposition that could help the RNC."

"Why would a Democrat want to help the RNC?"

"It's really for our country."

"Our country doesn't need any help from Democrats!  You’re all obstructionists who would vote against tax cuts for even the neediest millionaire.”

“Let me tell you what I’m offering.”

“Okay. Shoot!  Which is a right the Dems would take away from us if not for the Second Amendment written by Jesus.”

“Because Republicans have no spine.”

“What are you talking about?”

“You stand in servile supplication to a duplicitous ignorant lout who is destroying our country and probably selling it out to the Russians.”

“All you Dems ever want to talk about is Russia! What about President Trump’s broad-shouldered leadership?  He could carry two or three broads on his shoulders no sweat!”

“All you do is regurgitate Republican talking points! Look, I'm offering Republicans my spine, flawed as it may be.”

“What do you mean it’s flawed?”

“I have kind of a crooked spine. I'm sort of like Richard III except instead of being a king of England and subject of a Shakespeare play I'm an overage Jewish guy from a dinky town in Pennsylvania."

"If it's flawed, why are you offering it?"

“It’s gotta be better than no spine!

"We're doing fine just as we are. Did you know grabbing pussy supplies the daily requirement of eight essential vitamins and minerals?”

"Thank you for calling the RNC.  One thing I did want to ask.”

My heart goes out to those poor millionaires who can't afford a decent mistress with large implants. You'd the think pharmaceutical lobbyists would see these poor guys (and gals) in distress and help them out (for enough favors).

Yes, and I agree that if we want to keep millionaires investing in the economy we've got to keep them happy with big boobed mistresses. Of course I can't even afford a blow up doll with implants, but then again I don't create jobs. Except for the guy that makes the doll.