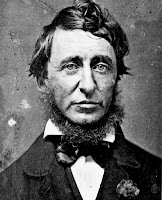 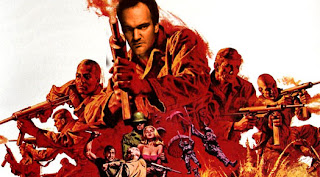 When I wrote the following pages, or rather the bulk of them, I lived alone, in the woods, a mile from any neighbor, in a house which I had built myself, on the shore of Walden Pond in Concord Massachusetts.  I lived there two years and two months, immersing myself in nature, self-reliance, simple living, and personal introspection.

The mass of men lead lives of quiet desperation.  But my life is anything but quiet or desperate. You see, I'm in the killin' Nazi business, and cousin, business is a-boomin!

It all began shortly after my arrival at Walden Pond. I was pondering the indescribable innocence and beneficence of nature and the notion that time is but the stream I go a-fishing in when my reveries were interrupted by a strenuous knock on the door of my small but thoroughly amenable tightly shingled and plastered cottage perched within the New England countryside.

"Are you Mr. Henry David Thoreau, the transcendentalist?" called a voice through the cottage window from the direction of the bean field I had diligently and gingerly planted and was so tenderly nurturing. "I am Colonel Hans Landa, the Jew Hunter."

Now I think that I love society as much as most and am ready enough to fasten myself to any full-blooded man that comes in my way, so I welcomed Colonel Landa as proudly as Chanticleer into my humble yet fully self-sufficient dwelling abode.

"May I smoke my pipe?" inquired the Colonel.

In the spirit of fellowship and conviviality, I nodded in the assent.

"So you're the Jew Hunter?" I asked of the Colonel.

"Colonel Landa," I offered in deepest sincerity, "I know of no more encouraging fact than the unquestionable ability of man to elevate his life by a conscious endeavor."

"Mr. Thoreau," retorted the Colonel with brusqueness of a most crude and acute nature, "I must now search your house for Jews, unless you have something to tell me that makes the conduct of a search unnecessary."

It was a propitious moment for Colonel Hans Landa to meet his transcendental maker.

"This will make the conduct of your search unnecessary!" I shouted, quickly reaching under the table and pulling out my Glock 34 Semi-Automatic Pistol, a present from Emerson.  I blasted Landa all the way to Walden Pond, where his blood drenched pulverized remains scattered into fish food for the random pickerel, perch, and pouts which local industrious fishermen are wont to catch in its expressive translucent waters.

I went to the woods because I wished to live deliberately, to front only the essential facts of life, and see if I could not learn what it had to teach, and not, when I came to die, discover that I had not lived. What I learned, what nature had to teach, was that I wanted me 100 Nazi scalps real bad!  And I did not want to discover when I came to die that I had one Nazi scalp less.

After that my life became a 24/7 Kill Wilhelm-A-Thon!

I destroyed Nazis by bashing in their brains with baseball bats, choking them with wild hickory nuts, slicing and dicing them with a machete, and reading them the first draft of my chapter on Economy with special emphasis on the accounting and bookkeeping details. Once I dispatched a Nazi by reading him the entire First Series of Emerson's Essays after which I carved a giant likeness of a loon landing upon Flint's Pond on his forehead.

The day is an epitome of the year: the night is the winter, the morning and evening are the spring and fall, and the noon is the summer.  I prefer the winter for killin' Nazis because I hate to get up early.  If a man does not keep pace with his companions, perhaps it is because he hears a different drummer. Let him step to the music which he hears, however measured or far away. But if the music be Wagner, shoot him right through the head!

I finally left Walden September 6th, 1847 as it seemed to me that it was time to look onward to the morrow. I do not say that John or Jonathan will realize all this, but only that day dawns to which we are awake. There is more day to dawn. The sun is but a morning star.


When the next day dawned I asked Marsellus Wallace for a job, and I turned out to be one hell of a hit man.

I even got to work with John or Jonathan Travolta!

My Life in the Woods,or
Die, Nazi, Die!
Where I Lived 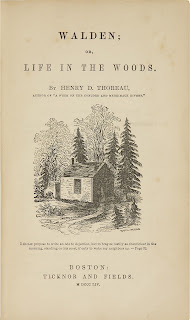 What I Lived For 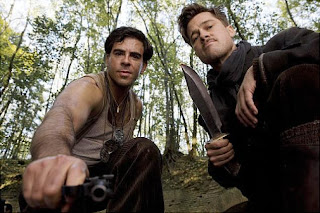 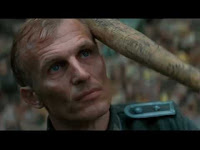 "The War On Christmas" - A Film by Ken Burns 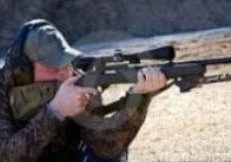 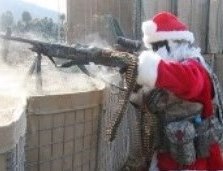 It has now been over six and one-half years since the War began and still there is no end in sight.

It is a brutal war.  One that pits brother against brother, elf against gnome, reindeer against reindeer, and worst of all, Santa Claus vs. the Martians.

It is that national cataclysm known as:

The War On Christmas
[Opening Music]

Its origins seem obscure and even petty now.

This Union, as it was called, demanded that there be just seven days of Christmas with only one Calling Bird, two French Hens, and no Lords-a-Leaping whatsoever. Frantic negotiations followed but failed over the verifiability of Maids-a-Milking.

On February 14, 2007,  an overtired and jittery elf assigned to protect a shipment of lumps of coal for Santa's Naughty List threw a holiday wrapped Hershey's Kiss at a Union soldier.  The soldier was badly chocolated.  The first shot of the war had been fired.

In the beginning the Union had the best of the fighting.  In the Battle of Candy Cane Crossing,  the Union's General Scrooge smashed through a line of Christmas Trees commanded by General Giggly Pointy Ears, resulting in the loss of over 47 candy canes, 28 holly wreaths, and six gingerbread men.

The fighting was fierce, as Union Private Lance Mesnick of Walden Massachusetts recorded that day in his journal:

"Everywhere you looked there were chestnuts roasting on an open fire! Suddenly I felt a sharp pain and whirling around I caught Jack Frost nipping at my nose! That's the last nose he'll ever nip ..."

By day's end,  not a creature was stirring --- not even a mouse --- at Candy Cane Crossing.

Christmas fought valiantly back.  A force of seasoned elves under the flamboyant General Stonewall Sniggle de Goop surprised Union troops in a dense fog at Gumdrop Hill. How did Christmas forces maneuver through the fog? Private Rudolf the Red Nose Reindeer later wrote to his wife:

"Oh, Sarah!  My heart is full and my hindquarters tingling!  This one very foggy eve Santa came to say 'Rudolf with your nose so bright, won't you guide our carnage tonight?' Dearest Sarah, I long to have my hooves around you! Love Always, Rudolf."

Just eleven days after the Battle of Gumdrop Hill, Rudolf the Red Nose Reindeer contracted hoof and mouth disease and Santa shot him.

The war was to continue on for six long years without decisive victory on either side.  Mistakes were made by both sides, such as Union General Grinch's decision to invade the North Pole.   Implementing a scorched ice policy,  Christmas forces decimated the Union troops which were wholly ill-equipped for the frigid temperatures and constant painful Nutcracker night raids.

In the Battle at Mistletoe Pass, Christmas retaliated by firing a deadly barrage of fruitcakes at Union forces, but the Union managed to counter them with an Anti-Fruitcake Shield.  All of us should have such a device.  A further assault with jetties of eggnog also failed when it turned out Union troops actually liked the stuff.

Will there ever be an end with honor to this fight?  Will a wise and just leader emerge as did once before during an earlier great American struggle? Will we ever get presents again?

Oh, Sarah, who the fuck knows? 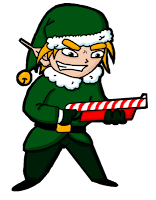 Freedom Fighter or Terrorist, You Decide 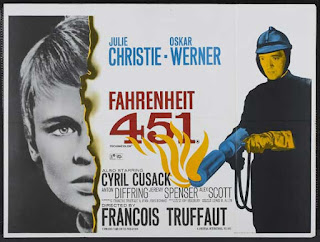 Montag was alone, sitting by a brook on the outskirts of the settlement.

Sure, he was helping to keep knowledge alive in the dark times by memorizing and becoming a book. But after these ten odd years, a dark sadness had descended upon him, sapping his spirit and diminishing his soul.

A tall man with a ruddy complexion and piercing eyes approached him.

"Oh, hullo,  Great Expectations.  I'm kind of bummed out because I'm just not getting anywhere with the ladies.  You ever have any problems like that?"

"Me?  No,  not at all,"  said the tall man.  "I'm Great Expectations.   I intrigue the hell out of women!   Y'know, I've been diddling Madame Bovary for the past three months!"

"Well, it's sure different for me.  Ever since I joined the Book People and selected a book to become,  women don't take me seriously. Hell, they treat me like a child!

"Well, what do you think the problem is, Goodnight Moon?

"The problem is I can't compete with the more macho books!  Last night I went to a single's bar withCaptains Courageous and Last of the Mohicans.  We ran into two chicks,  Anna Karenina and Tess of the d'Urbervilles."

"Right away Captains Courageous pairs off with Anna Karenina and hasn't been home since.  I spent the whole evening playing Pac-Man while watching Tess of the d'Urbervilles  grind into Last of the Mohicans on the dance floor!"

"Well,  maybe some woman will admire you for your warm sentimental values as opposed to manliness."

"That only goes so far, Great Expectations.  Can you imagine:

"I just had a thought, Goodnight Moon.   A new woman recently joined the group;  name's  Dr. Zhivago.  She looks a bit like a young Julie Christie."

"Well, I'll introduce you.  Straighten yourself up,  clean up your punctuation, and remember to stay in proper tense at all times."