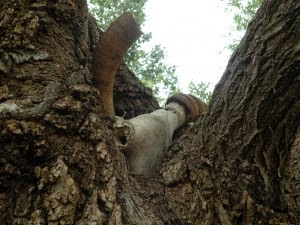 It was the summer I was 12 that I climbed up the little tree and carved our initials PB & CC within a heart. The carving was crude but the feelings were not.  I was in love and knew I always would be.

Love, however, never quite stays the same.  Other loves came and went. Some were sweet, others quickly soured.  Sometimes there was joy and happiness, other times disappointment and loss.

I came back to the little tree, climbed up and found the carving PB & CC within a heart.

It had endured, as had the love it bore.

Perry Block loves Coca-Cola!
My first. My last.  My Always!
~~~~~~~~~~
Okay, so it turns your insides into an enormous plate of spaghetti cooked al dente and throws corrosive battery acid into your mouth with an intensity no tooth can withstand ....  but, hell, no relationship provides the incredible Zip!!! that Coca-Cola does. So my short response to this week's Friday Fictioneers picture prompt is in tribute to the Pause that Refreshes, Coca-Cola.

The other Fictioneers, Coke lovers and detractors alike, have many other views of the prompt, all of  which you can access by clicking here.

So if you indulge, have a Coke and a smile.  Especially if you have any teeth left to smile with.
Posted by Perry Block at 2:18 PM 23 comments: 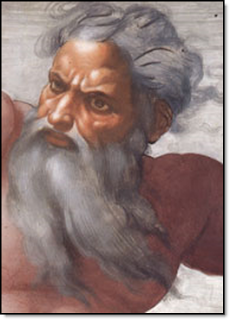 In Rabbinical School she was voted "Most Likely to Pass Out at Circumcisions."

Yet the world is now abuzz with news that Rabbi Debbie has wrought the greatest innovation to Judaism since Moses lugged two engraved tablets down the mountain and advised the Jewish people to take one and call him in the morning.

Her innovation is an entirely new branch of Judaism called "Hello Yahweh."

"The state of the world had caused me to wonder," Rabbi King said. "How could a just God allow war, poverty, disease, and ABBA?  Why would the Supreme Ruler of the Universe permit the Jews to be so unfairly mistreated for centuries when only one Jew, comedian Bob Saget, actually deserves it?

And why is there death when we already have blind dates?"

"God cannot be evil," Rabbi Debbie said, "so there can be only one answer to why the world is so troubled."

From that she developed Hello Yahweh,  the purpose of which is to get on God's case.

"We begin each service with a special greeting for the divinity,"  explained the Rabbi. "The Congregation in unison says:

just like Jerry Seinfeld says to Newman.   And  God responds:

"We next partake of Chodosh Orov or the Holy Performance Evaluation, in which we review the Supreme Ruler of the Universe's performance for the past week," explained the Rabbi. "The congregation reads the Evaluation Form silently while I read aloud.

We then rate the Lord in three specific categories: Omnipotence,  Omniscience,  and Punctuality."


“How does he generally do? So far this year hasn't been great. He’s being tutored in everything except Punctuality.”
"It's Tough God Love!" said Rabbi King.
"We're holding Hashem accountable. When he acts like a schlub, we treat him like Newman. If he does better, more like George and so forth."
News of Hello Yahweh is spreading and  many feel a deep sense of comfort in knowing that God can be every bit as much of a lame ass as they are.  And if even one war ends or disease is cured as a result of God working harder to raise his D in Omnipotence up to a C+ ,  there's hope for the rest of us to stop screwing up too.

Plus getting rid of the disease and war are kind of good things on their own.

"I believe God doesn't want us to always be kissing his ass," concluded Rabbi Debbie King, the now famous founder of Hello Yahweh.

"He just wants us to give it a good swift kick every now and then."

The Man Who Showed Up 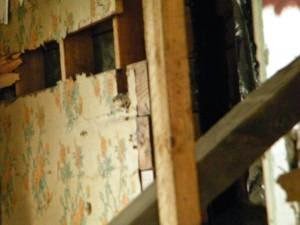 "Whaddya mean, Mr. Block?  I got everything done as you asked."

"Look at that wallpaper! It's faded, it's shredded,  the design looks like fleas copulating!"

"You don't like abstract art I take it, Mr. Block?"

"The banister is just a hunk of old rotted wood!"

"And what about these two gaping holes in the wall?!"

Not only is Mr. DiPhillipo the man who showed up,  but I also showed up this week for the Friday Fictioneers with a very concise and well-constructed 93 words in my weekly entry in response to the picture prompt above.

Click right here and the other Friday Fictioneers will show up as well, each with his or her own unique interpretation of the prompt.

Now I'd love it if you'd join me in enjoying my new basement!  Hope you like drafts,  leaky ceilings,  and abstract art. 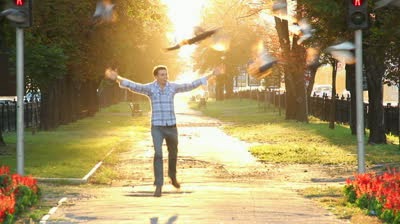 I've frequently been accused of being sort of a negative person, but that is totally ridiculous, stupid, and as completely wrong as a thought can be and anyone who thinks it is an idiot not worth associating with.


Maybe some day these and other Life's Little Pleasures will turn me from someone who's a bit negative into a true happy camper!

I hate camping though.

Looking To Get Out 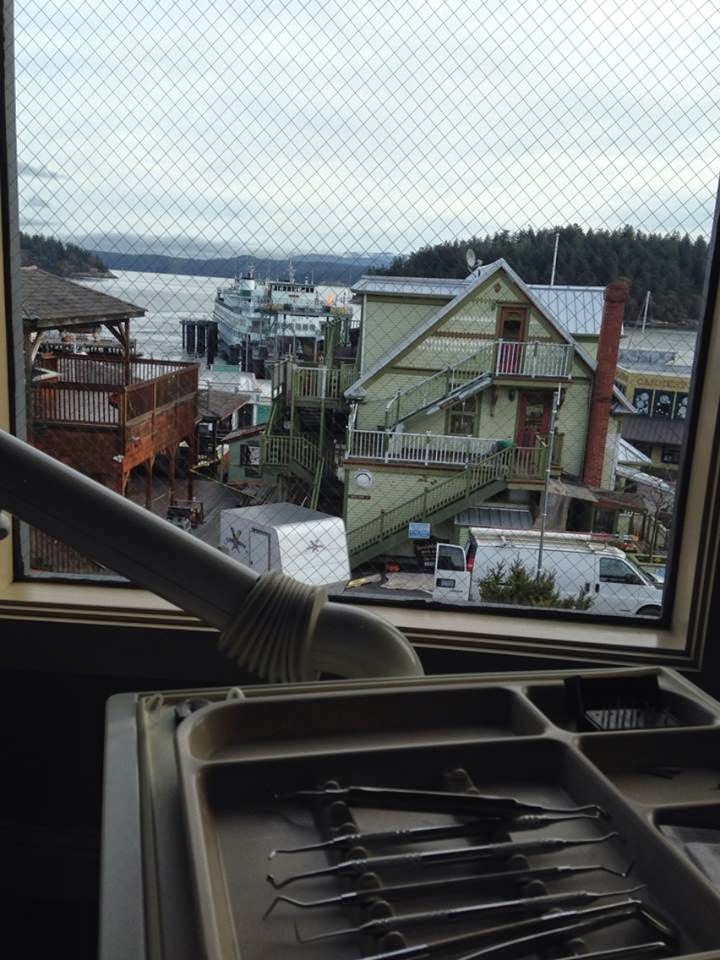 We live in a small harborside town named Tubbsville which once thrived due to an active mining operation, now long closed. All that remains from those days is the tiny hotel and Franco's, the bar where we hang out.

"Bobby got out," said Ralph the other day in Franco's. "Now he's an actor on Broadway!"

"But why would we want to?" I asked, downing my Budweiser.

"There's a world out there, Perry!" he cried.

Maybe it's because I saw a dark cast of this picture when I first saw it,  but I absolutely did not see the dental equipment in the foreground until I began reading other stories. The dental angle would have been fun to play with, but for now I'm  hanging with Tubbsville, yuppification, and me.  That's the reason for my toothless story based on the picture prompt above for this week's Friday Fictioneers.

The other Fictioneers have sunk their teeth into the prompt in a lot of other ways and you can get a complete check up from each one of them if you click here.

If you don't mind, I'm off the San Francisco for a spending spree.  One gets so tired of hanging out with all those gorgeous women! 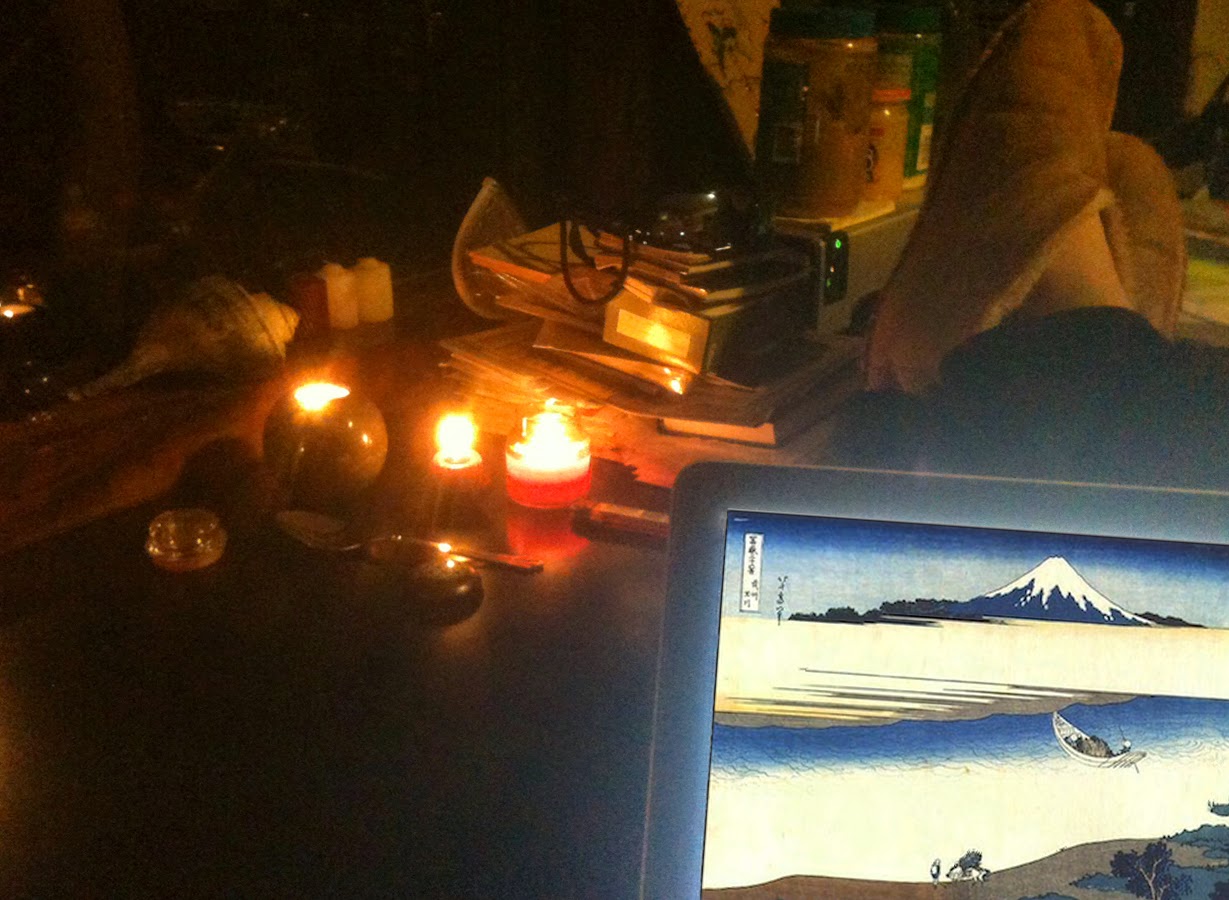 Perry and his friend Nanook talked on Skype every month or so.

"It looks so beautiful by the lake and mountain up there in Alaska, Nanook," said Perry, fully enamored of the exotic friend he had met several years ago on vacation.

"Yes, but climate change is threatening our way of life, my friend," said Nanook.

"Our environment is shrinking, seals are dying, and even Mount Moosejaw is crumbling!"

"There is nothing, my friend.  Farewell for now."

As the transmission ended, Nanook turned to his brother, Rocky.

"Take down the phony set, Rock, and let's hit the beach!  Next month, we hit him up big  for the Save Mount Moosejaw Fund!"

You'll be happy to know I caught on to the ruse and didn't give the Save Mount Moosejaw Fund a single dime!   Of course I had previously funded the Nanook Scholarship Fund, Nanook School for Wayward Seals,  and Nanook Jewish Deli in the Tundra and I was pretty much out of money after that.

Anyway, that's my take on the above picture prompt for the Friday Fictioneers this week, and the many other Fictioneers' interpretations are available by clicking here.  Please check them out.

Just don't let any of them ask you for money for Mount Moosejaw!