Aquaman, Ruler of the Deep State 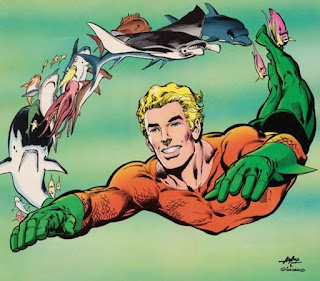 If there's an annoying term that right wing ideologues bandy about these days, it's the "Deep State."

Some believe this term is used to describe people in government who are trying to hinder the Right’s favorite deranged demagogue from destroying the country, but that turns out to be wrong.

The Deep State is Atlantis.

What state could be deeper!

Atlantis sank beneath the waves because Trump convinced its leader Aquaman that global warming was a hoax created by the Thracians. Everyone in Atlantis survived, however, because Aquaman had the foresight to get roadside assistance.

Under cover of oxygen, Aquaman and his army of clams, shrimp, and other little fishies in the water attacked the White House. Unfortunately Trump was waiting for them with cocktail sauce, oyster crackers, and little forks.

“Mr. President," said Aquaman calling Trump the next day, “you are too brilliant for me. Please come as my guest of honor to an all-you-can-eat seafood buffet in Atlantis featuring lobster, crab, and many of my other relatives.”

“Will there be mermaid pussy for me to grab?” asked Trump.

“Will there be mermaid pussy?” replied Aquaman. ”You’ll be grabbing so many flippers they’ll call you the Pinball Wizard!”

“When you leave Atlantis, Trump” laughed Aquaman, King of the Sea and Ruler of the Deep State, “the only crabs you’ll have will be the kind you can’t eat!”

Poor Trumpski, getting something on him that can't be washed off with soap and water. I wonder who he'll blame that on? Anxiously awaiting his forth coming tweet.

His forthcoming tweet: AAAHHHHHHHHHH!!!!!! Aquaman and the Deep State strike again! I think I might make the Deep State a continuing thing to bedevil Trumpski. Then we'll have deviled Trump, whatever that means. God forbid Trump gets a fresh supply of little forks!

I can't even reply to a comment on this damn thing.

No, you can. You just can't link replies in the same way as before. But reply away, I sees ya!