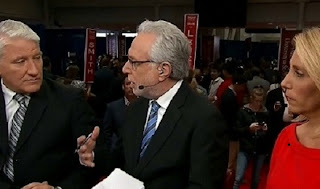 Incredible!  I just got invited to a last minute party at Farbman’s house and if I’m going to go, I've got to get ready.  I need some advice fast!

Okay, I’m going to bring in my panel of experts:

"Dana, I'll start with you.  Should I go to this party?

"Perry, I've been around this town a long time, and I’ve learned when someone is as far down in the popularity polls as you are the best move is to hit a party. But this time, try not to spill your drink all over the host!"

“You're in trouble, Perry Block!  The most recent Quinnipiac poll shows that you have an approval rating of 13%."

“All right, let me ask you, David Gergen:  assuming I go to the party, should I bring a bottle of wine or is Entenman's crumb cake good enough?"

“I think you’d be absolutely fine with the Entenmann’s crumb cake. Both Ronald Reagan and Bill Clinton always brought crumb cake to parties while Richard Nixon favored Twinkies, and we all know what happened to him.”

“No, I don’t.  As you may recall, Dana Bash and I were once married, but we broke up because I always wanted to bring Entenmann's, she argued for Beaujolais. That and the terrible sex.”

“You’ve been known to like a good bottle of wine, Van Jones.  Can I get away with something under ten dollars?”

“Well, that depends.  Do you want to be viewed as a jerk who brings to a nice party cheap shit wine that makes Listerine taste like Dom Perignon, or do you want to ever be invited anywhere again?”

“Invited anywhere again. Any recommendation as a good wine to bring?  Gloria Borger?”

“Spend at least $25 and don’t get Chardonnay. It screams I’m a douche bag!”

“I completely agree with that.”

“One more issue to discuss: Does the panel think I have a shot to meet a woman at the party who takes a hankering to me who’s around 50 and still hot?"

“In all my years of observing you, Perry, I can pretty well conclude the answer is no.”

“I agree.  Nothing in your history would support that.”

“Jeffrey Lord, haven’t heard from you yet tonight.  Do I have a chance to score?”

“Allow me to be a contrarian here.  I think it's a certainty you will meet a hot early-fiftyish woman with large breasts who’s going to be very interested in having sex with you later tonight.”

“Jeffrey Lord, you really think that?”

“But as a Trump supporter, you lie all the time.”

I'm jealous that you have your own self-deprecation strategist, Perry. That explains why you've always been able to put yourself down with such grace.

Personally, I think the 23% approval rating is higher than I would have expected. Good luck with the hot, fifty-plus babe with the large boobs. I hear she recently escaped from the primate section of the Philadelphia Zoo.

Damn. I was going to attend the party and look for funny Jewish men to torment but there won't be any Chardonnay so forget it now. I'll look for love somewhere else.

You were right, Russell. An approval rating of 23% was way too high and I have reduced it. As for Self-Deprecation Strategists I'm not sure I want to keep Van Jones. He's too competent and self-confident. I can't have that in a self-deprecation strategist!

If you're coming to the party, Tracey, I'll see that there's plenty of Chardonnay. Just as long as you don't cramp my style with the hot 50 year old with big boobs! The one in my mind. Like in the prior post. And everywhere else.

With Russell and I as your wingmen what could possibly go wrong. You better have a pick up line ready. Cheers, thanks for the wine.

Wingmen, a panel of experts, what could go wrong? Let me count the ways.