Saving the Earth with Brooke 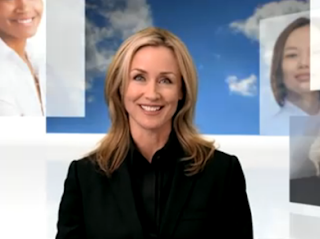 Although my middle name will never be "Green," I do my best to be a competent environmentalist most of the time.

I recycle dutifully, always stop to admire the beauty of nature on my way to the fast food joint, casino, or honky-tonk bar, and never throw an empty coke can into the trash rather than the recycling whenever there's a mouthy 11 year old anywhere about.

But for the last several years, my efforts to save the planet have been put to the test.  It all began the day that tall, blonde, and beauteous actress Brooke Alexander became the spokesperson in a serious of memorable TV spots for the American Petroleum Institute (API)  a/k/a "The People of America's Oil and Natural Gas Industry."

You've seen them, I'm sure.

Stylishly clad in a well-tailored and handsomely fitting black business suit, Ms. Alexander strides regally across a map of the United States and deftly weaves between images of modern industry,  wheat fields, and dedicated professionals while informing us that today's Oil and Gas Industry supports almost as many American jobs as William Shatner has had since Star Trek was cancelled in 1969.

Ms. Alexander explains that although alternative forms of energy like solar panels,  hydro-generation, and harnessing Donald Trump's mouth are important,  oil and natural gas have the capacity to provide energy to heat millions of homes and power millions of cars for the next 60 years, and after 60 years we'll all be dead anyway.

Luminous smile ablaze, Ms. Alexander adds that most people favor that governmental policies regulating of oil and natural gas be changed.  Though left unsaid, the impression created is that "changed" as utilized here may well be interpreted as "taken for a ride and dumped in the East River."

It isn't just that Brooke Alexander is drop dead gorgeous that makes me want to believe everything she says, even if she says we should all ingest lumps of coal or seed the clouds with premium gasoline charged to my own personal Visa card. The reason I want to believe each and every word that flows from the mouth of Brooke Alexander like oil from BP into the Gulf of Mexico is because in addition to being gorgeous,  she's frankly kind of old!

She's not as old as I am, of course.  But in the world of television, anyone onscreen over the age of 30 is usually either the brother-in-law of the producer or someone loitering on the set whom Security carelessly failed to whisk away before the cameras began rolling.

The 48 year old Brooke Alexander, obviously chosen in part because her quasi-advanced age makes her appear mature and credible, is one of the few older TV pitch persons not shilling for arthritis medication or Cialis for the man in her life's daily use. And at age 48, Ms. Alexander is somewhat in my market, assuming my market consists of beautiful, accomplished, and successful women who are in no other conceivable way in my market other being within 13 years of my age.

I want to save the environment, but I want Brooke Alexander in that environment.

I am concerned about the polar ice cap melting.  But talk about melting, just look at that smile!

Fracking?   Write your own joke.

But suffice it to say that if Brooke Alexander were to look in my eyes and simply say the word "fracking," I'd probably join the Republican Party on the spot!

I guess, after all, I'm not about to be saving the Earth with Brooke any time soon.  Or despoiling it with her either.  But at least one good thing's come of it all:  Brooke Alexander has motivated me to write a letter to my Congressperson. And I'm going to do it right now!

I am writing to urge you to support strong and effective environmental regulation wherever and whenever warranted.

P.S.  Any chance you can get me a date with Brooke Alexander?

Very funny! You hit the shallowness of their marketing right on the mark.

Yes, I try to be politically savvy at all times.

That's why I'm in love with a blonde shill who used to work for Fox News.

Hahahaha! You are fabulous! Thank you for visiting my place today. If it helps any, I'm incredibly hot and environmentally conscious, but for real.

For example, right now I'm going outside to pick up plastic bags and bottles that get caught in the trees and water basin in my backyard.

Also there might be some attractive construction workers out there.

I've seen your picture on your blog.