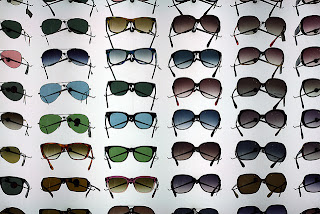 I've never been the kind of person to wear sunglasses.

That's perhaps because I was brought up in an era where sunlight was your friend, the purveyor of Vitamin D,  bestower of glowing tans that bespoke health, and best perceived healer of teen aged zits since Clearasil.

I also went to a doctor in those days whose opinion was that sunglasses were unnecessary and tended to make your eyes weak and overly sensitive to the sun.  This was the doctor who also told my Kosher-keeping mother that my brother needed bacon to keep himself healthy and growing strong,  no matter what God himself might have to spake in the matter.

Today, of course, Sunlight is Public Enemy No. 1!

It is the Lex Luthor of our natural environment, arch villainous fomenter of multiple forms of cancer, skin the consistency of Naugahyde,  and given enough exposure, eyes that bug out of your head like those on a squeeze doll. 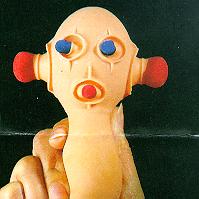 Still and all, sunglasses for me remained an afterthought to be worn on only the most blazingly bright days after routing through the drawer for whatever random pair of shades might be available, whether they be an odd pair I found at the playground,  my ten dollar John Lennon aviators (in which I look more like any one of the Lennon Sisters of Lawrence Welk Show fame than John Lennon), or leftovers from my last visit to Dr. Kosloff, the ophthalmologist.

But now at last I'm getting serious about serious eyeball protection.   Why?

Because at my age, the eyes no longer have it!   Neither visually nor cosmetically.  Time at last to rethink my optical options.

So I read up a bit and began making the rounds to check out 50 or more shades of polarized grey, or whatever other tint might catch my fancy.  First stop, the sunglasses department in a well-known department store.

No, thanks, I'm interested in eye wear, not retinal implant surgery.

There are many, many, many kinds and styles of sunglasses,  all of which look goofy on me and probably on you as well.  What's important is to get maximum protection from the sun's UV rays and if desired, polarized lenses to reduce glare from both the sun and the salesperson should you try to punt on polarized lenses in favor of less polarized costs.

As for cost,  I've learned,  you can probably score yourself a decent though perhaps not wholly durable pair of shades for as little as twenty bucks.

I went to a few different stores and tried on many pairs of sunglasses before finding a pair that did not make me look either like the Mysterious Dr. X,  a refugee from a 1953 showing of House of Wax in 3-D starring Vincent Price, or someone so nerdy even I wouldn't hang with him.

I delicately took the chosen pair off the rack, implanted them above the bridge of my nose, and made them mine.  There they are below, dramatically depicted in a manner which is frankly quite a bit more dramatic than as depicted when seen actually riding above my nose.

As for cost, I spent a bit more than $20.  I decided it was important, at least for me,  to opt for both durability and the dual form of glare reduction.

And now I wear my sunglasses everywhere I go where even the slightest scintilla of sunlight short of the inner chamber of a cyclotron is present.  I may never be the kind of person who sees the world rose-colored, but I'm getting used to seeing it in sort of a lazy hazy gray.

And I'm glad I'm now the kind of person to wear sunglasses.

They cover over half of my  face, including the half with the sunken eyes which I have always had and which as I get older increasingly look like they were formed by an aggressive drunk maliciously grinding two shot glasses into my occipital orbs.

That leaves visible only one half of a face that is at best 25 years past its last most recently viable Cuteness Date.

Lookin' Good In These Shades!
Eat your heart out, folks ...

Now I feel better for wearing sunglasses all the time. Very cute tweet that led me here by by the way. 50 Shades of Polarized Grey!

Thanks, Nina. Oy, yet another thanks!

I figured the world didn't need another parody of the stupid book, but I just couldn't resist the title.

Keep wearing those shades. I'll bet you even look good in them.