It's kind of hard for me to believe, but in slightly over a month I'll be in Costa Rica with my 17 year old son Brandon.

Who am I kidding?  I wasn't designed for the gusto life.  I don't even watch the National Geographic Channel unless the lights are on.  And how am I going to keep up with a 17 year old? When I was 17 years old, Lyndon Johnson was in the White House and I was still wearing orthopedic shoes.

One of the toughest people I know is writer Carrie Bailey (who tweets as @PeevishPenman),  so I decided to call her for some close-to-the-last minute inspiration and advice.

"First thing you have to do is believe in yourself,"  said Carrie.

"The second thing is to stop thinking about yourself as a wimp!"

"You have to overcome this negativity!" said Carrie. "Build yourself up by focusing on something courageous you actually have done in your lifetime."

That was easy for Carrie to say.  Less than half my age, Carrie had lived on three continents, single-handedly raised a child to near adulthood, and was now attending graduate school in New Zealand. Descended from a hardy Native American stock known as the Metis, Carrie was a'huntin' and a'fishin' and a'trappin' kind of person.

By contrast, the only kind of person I am that begins with an apostrophe is a'kvetchin'.

"I'm flipping through my lifetime.  I'm up to where I'm getting beaten up by the fifth grade girls."

"Aren't you forgetting something important?"

"Oh, that?  Everybody gets lucky once in a while."

"Perry, you can change your basic nature if you want to!  Haven't you ever read any existentialism?"

"Yes, but I was predestined not to believe in it."

"Look, Perry," she went on, "I know there is more strength in you than you realize.  Whatever was in your past doesn't have to be your future.  Do one thing each day that scares you."

"I'll try," I said, "as long as it doesn't involve women with facial hair."

Carrie's words had finally gotten through.  It's good to have a friend who has faith in you even when you don't have it in yourself.  Maybe I can handle the gusto life.  Maybe --- given enough time and a bit of work on myself --- I can handle just about anything!

"Don't mention it. It's what friends are for."

"Then again maybe you are just a wimp!  Gotta go, enjoy your trip!"

It's also good to have a friend who sees through your shit too! 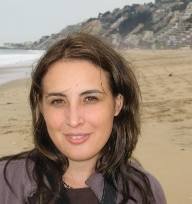 "Man Up, Perry!"
Carrie Bailey on the Beaches
of New Zealand

You're the man, Carrie!

Of course you know, Winonah, that part at the end where I strike out with Carrie is pure fiction, but this is a family-oriented blog.

You'll be fine. And you wouldn't want Brandon to get discouraged by the sheer scale of your amazingness. In fact, you might want to rein it in a bit :o)

Although I didn't need that :o) right after the second sentence!

You're absolutely killing me here. There's a certain part of my personality that you've completely channeled. However, I would have employed a few logical fallacies to confuse you into submission wherein you'd agree to anything I said including a new approach to self-confidence. Love it.

Everyone who's read your blog before knows what you've got in mind, Perry.

I usually don't need logical fallacies to fall into submission, but you have taught me never again to SUBMIT --- unless I'm making a data entry.

And what I'm saying is that the ending in which Carrie rebuffs me is the only part of the piece that is fabricated.

What actually happened makes "Fifty Shades of Grey" seem like "Old Yeller," but it wasn't funny, so I couldn't use it.

You know, I took artistic license.

Hey Perry,
I like your Man Up logo.
Did you do that yourself?

No, 'fraid I snatched it off Google.

When it comes to artwork, I've a long way to go to Man Up!