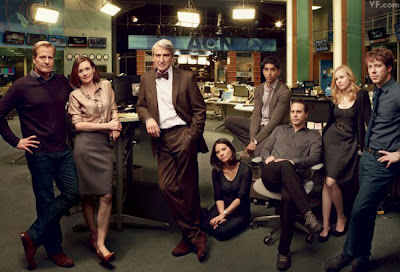 Mac:  Are you In on our prodigious efforts to make News Night a broadcast whose manifest integrity shines a beacon of truth and rationality unto the body politic of what can yet be a great nation, or are you Out,  intent on spending the rest of your life reporting  on the circumference of Mario Lopez's dimples?

Will:  Frankly,  Mac,  I believe in ultimatums about as much as I believe that Aaron Sorkin could ever craft a character into one of his teleplays or award-winning  motion pictures who doesn't speak like an Oxford don on amphetamines!

Mac:  Since you mention that, my benighted knight in tarnished armor, I'm about to apprise the anchorman himself of the salient fact that a new cast member is joining The Newsroom this very week.

Mac:   Dumb.  As dumb as the love child of Rick Perry and someone who tunes into ABC News thinking David Muir's latest haircut constitutes breaking news.

Will:  Who is this character?  What assemblage of letters when placed in the proper order and spoken aloud connotes his name?

Maggie:  (joining the two of them)  Will, Mac .... I'd like you to meet Perry Block!  He's just been written into the show as a commentator on News Night for the Baby Boomer perspective on the news.

Mac:  Peachy, I'm not so sure.  Actually, I think we may have just hit the pits.

Will:  How do you find our newsroom, Mr. Block?

Mac:  Maggie, do you realize this is the first character that Aaron's created since he started writing in the third grade who's used the expression "ummm."

Maggie:  (becoming flustered) I'm so sorry! I didn't know, I couldn't stop it!  Charlie Skinner hired him so there'd be a character in the show almost as old as he is!

Will:  Don't worry, Maggie.  Seek solace in your boyfriend Don's strong but emotionally empty embrace only to find your deepest needs rebuffed like the applicant to Harvard whose SATs  were under 2400.

Mac:   .... and ultimately find love and support within the nurturing heart of our producer Jim,  with whom you'll soon become entwined as intimately as a bee becomes entwined with pollen.

Perry:  You mean that Maggie and Jim are going to get it on?  Being that this is HBO, I can't wait to watch those two hit the sack!

Mac:  It's incredible what a dipshit he is.  I can't believe Aaron is going to collect full pay for writing this episode.

Perry:  Hey, Will!  What's the latest on Mario Lopez?  Are those dimples real or what?

Will:  Mac, I'm ready to give you my answer.

Will:  To your ultimatum.  My answer is that I'm In!

Will:  Because now we know than that Aaron can write dumb! There's nothing the guy can't do.  I smell Emmys for all of us!

Mac:  And so am I!  I'll bet even this douchebag wins an Emmy!

Perry:  Thank you very much.  Now where can I get me some cheap eats around here?  Say, do you guys know David Muir?  Great haircut!

You mean my lines of course, right? The others speak OK too.

Do you get "The Newsroom" in Australia?