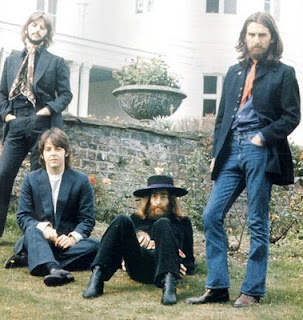 All you need is them!

It may not beat quite as loudly as it used to,  but for most Baby Boomers the music never dies and rock 'n roll never forgets.  The manner in which we enjoy the music, though, does seem to go through a change or two.

Once we thought Rock 'n Roll Would Save the World,  but I don't remember that ever happening.  There is still war, crime, poverty, injustice, Martha Stewart, reality TV, deification of the Second Amendment, and a television program called "The Chew." The only thing missing from the world since those golden olden days of yore is my hair.

Similarly Sex and Drugs and Rock 'n Roll is no longer the Mantra of Our Generation.  Most of us are lucky anymore to be pulling down one of the three.

And most Boomers no longer follow the comings and goings of rock stars as they once did. There was a time I could readily tell you that Stevie Winwood went from the Spencer Davis Group to Traffic to Blind Faith and on to a solo career that exploded with Arc of a Diver and that Neil Young traveled from Buffalo Springfield to Crazy Horse and then to the epic Crosby, Stills, Nash, & Young and is still doing God-knows-what today.

The following represents the wisest commentary on the rock 'n roll this Boomer still loves that I can impart at this stage of my rather advanced game.

1)  Bob Dylan ought to pick one religion and stick to it.

3)  Joe Jackson's song Is She Really Going Out With Him?  is an instant classic with a catchy melody and spot on lyrics expressing the male angst that almost every guy has felt at one time or another:


"Pretty women out walking with gorillas down my street ....  look over there - where? - here comes Jeannie with her new boy friend,  they say that looks don't count for much, and so there goes your proof .... Is she really going out with him?  Is she really gonna take him home tonight?"

And yet everyone jumps up and down over Steppin' Out, a pleasant enough little tune  that sounds like the theme song to a 1970's cop show. There's something going wrong around here!

4)  Mick Jagger must never die.  I never believed Frank Sinatra would die,  and yet he did.  Don't ever die, Mick!  Do it for Frank.

5)  No disco song ever written is as good to dance to as Sugar Magnolia.

6)  I still play air guitar.  I wouldn't mind if my name were Randy California.   In a way, I'm kind of glad we'll never have to come face to face with a 70 year old Jim Morrison.  WXPN in Philadelphia has got to stop playing You Get What You Give by The New Radicals,  one of the more overrated "rock" songs in recent memory,  cheap pop dressed up as rock with simplistic pseudo revolutionary lyrics.  I can never decide if it's cool to like Todd Rundgren or a guilty pleasure.  I could go on like this forever .....

7) The Beatles are the single most important musical group to appear in the second half of the twentieth century.  They changed the music we listen to, they way we think, the way we look, the way we act, and the culture of the world.   Even though today I hate Paul McCartney, I would still die for him.

8)  Some classic rock,  no matter how inherently great,  is as played out as Cher's career.  If you're still going "Oh, Man!," whenever Stairway to Heaven,  Layla (original version), or The Waiting is the Hardest Part comes on the radio,  you've got serious  "It's time to move on, dude!"  issues.

10)  If it's similarly deep and salient thoughts you want about rock music post year 2000, you'll have to talk to my son Brandon.  Or, better yet, talk to your own kid.

Our rock 'n roll hearts beat on.  And best of all,  are rocking on in a new generation as well.

As always I love your blog. I sort of pine for the good old days at times. That is until I recall how much of them I don't seem to recall. We'll blame it on old age.

I often pine for the old days more for their potential than their actuality, but then that's me. The music, however, will always be there!

And remember, Brett, you are not old, you are "Nouveau Old." I'm not sure it makes a difference, but it makes me feel better.

I love you, Brother Perry. :) I may be younger, but I understand these feelings. These greats shall never die (especially Mick! He damned well better not! After a LifeTime with his voice as a backdrop, which I took for granted, I have recently begun to study him, in an attempt to learn his longevity secrets.

Thank you for Immortalizing all these important people! (You are a baby amongst them.)

I love your Comedy, Perry, and your Writing. You are an amazing friend, and I wish you success in everything...plus Happy BirthDay! <3 CherylFaith

In addition to your great heart, you've got a rock'n roll one too! Never change.

Especially in the capacity of liking my stuff!