For The Math Challenged Only 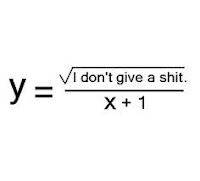 There's an old joke that goes:

There are three kinds of people in the world.  Those who are good at math and those who are not.   And the third group --- the one into which I fall  --- is those who are so bad at math they don't understand the joke!"

I've been math challenged since the very early age of 3, or 4, or 57, I'm not sure which. It began when I was learning to count.

Count to 100?  If God had meant me to count to 100, he would have had me born on a planet where people have a whole hell of a lot more than ten fingers and ten toes!

Through the years in school, I was mauled by math, addled by algebra, and when it came to geometry,  just plain Lost in Space.  Although words were my friends, numbers were my enemies --- even the cute ones like 2 and 16.  I took comfort in one thing:  once I got out of school, I would never have to use math again! Hah! Hah! Haaahhh!   Just like Latin or Chemistry or Gym.

But I was wrong. Math is all around us.  All the time.  Kind of like Ben Stiller.

You have to balance your checkbook.  I can't balance my checkbook without a member of the Wallenda family on either side of it.

You have to make change.  Over the years I've lost enough money through faulty change-making to get the U.S. out of hock to China. Or at least enough to pay off the mortgage on the Grand Coulee Dam.

You have to figure out how much you owe Harry the Slip before he sends a guy with a broken nose named Louie to break all 4 bones in your body!

Even more upsetting, Einstein, Hawking, and countless others (whom I am wholly unable to count) have taught us that the entire universe is governed according to the principles of mathematics. No wonder my life is screwed up;  I'm living in a reality based on a subject in which I rarely got better than a "C!"

So what are we math malcontents supposed to do?  How do we survive in a universe where they've given us a number and taken away our name?

1) Rent a Math Guy.  Consider renting your own personal Math Guy; maybe check Craig's List.  A good Math Guy will ensure you always split the dinner check correctly, decipher your Verizon bill, and determine exactly the correct amount for you to wager to become the next Jeopardy Champion should you make it to Final Jeopardy and come up with the correct question.

2) Reject a Universe Based on Mathematics in Favor of One Based on Folksy Colloquialisms, and Hope It Catches On.

"The distances between objects in our universe are indeed vast.  Assume a spaceship leaves Earth travelling at the speed of 'Whee! This is such fun.'

Between the time it departs Earth until the time it arrives at the nearest star system, a period equivalent to 'I thought we put the turkey in sufficiently early but it's still not done and Uncle John wants to leave' will have elapsed.

This equals a staggering distance of 'Durn it, Madge, if you were to walk it, by the time you got there your feet would be the size of two overripe casauba mellons!'"

4) Reject a Universe Based on Mathematics  in Favor of One Based On Presidential Administrations, and Hope it Catches On.

"That your girlfriend?  How old is she?"

Talk in percentages.  Say things like "what's the bottom line?"Learn the conceptual difference between a million and a billion and why you'd rather have either than 25 bucks.

And for God's sake, go on Wheel, not Jeopardy!

Math I'm okay with, but when they started throwing in those letters ... well I can either spell or I can count I can't do both at the same time.

Then at last we've got a system. You do the numbers, I'll swing the letters.

And we'll rule the Earth!