I Was Just Seventeen ... 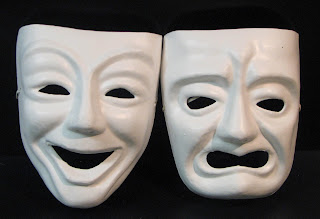 Yet another in that never-ending series of movies in which a parent and child switch bodies. This one, however, will cost you nothing and is mercifully brief!

As presented in three acts on the New York Stage
at the Helen Hayes Theatre.
(No truth to the rumor that Helen Hayes actually got up and walked out.)


It's  morning about 7:30 at Perry Block's residence.   Perry sits in the kitchen at the PC with the television  on.  His 17 year old son Brandon enters the room to grab something to eat and head to school.

Perry:  No,  I just wanted to get my last minute fix of  Ann Curry before they axe her for not being as smart or attractive as Al Roker.

Brandon:  I see. Anything interesting in the news?

Perry: There was a bizarre story about some guy addicted to LinkedIn.  Pathetic!

Brandon: What are they doing for him?

Perry: That looks oddly like Sara Jessica Parker's profile, only less equine.  Where did you find it?

Brandon: Out back last night.  It was glowing in the darkness.

Perry:  Oh my God!  That could be a cosmic relic left over from the original Big Bang, some 15 billion years ago!

Perry:  Or it might have dropped out of some kid's Happy Meal.

Brandon:  I picked it up because it  looks like the kind of object that could do magical things. Like cause people to change identities in those movies where parents and kids change places.

Perry: How many of those stupid movies did they make anyway?

Perry approaches the stone with a growing fascination.

Perry:  What if there were just one more?  (begins singing, if you could call it that)  I was just 17.   You know what I mean.   And the way I looked was way beyond compair-aire!

As Perry sings (if you could call it that), the stone begins to glow a bright green.  Both Perry and Brandon begin to squirm, make goofy faces, and act weird.  Nothing new for Perry.

Perry: I warned you about the sushi at Miguel's Little Touch of Tijuana!

The lights flicker on and off several times.  When they remain on at last, we witness Brandon with a smirk on his face and Perry looking like someone dropped the world's largest goldfish down his pants.

Brandon (as Perry):  I feel awful.  I feel neurotic and insecure.  I need therapy.  I need a blankie!   Dad, how do you feel?

Perry (as Brandon):  Ready to rock and roll!

Perry (as Brandon)  walks through the hallways at the high school  looking  giddy as a schoolgirl!  Although he is actually a schoolboy --- that's just an expression.  We're not going to pull a gender swap on you too!

Third Teen (Benji) :  Bran, over here!  Got somethin' to talk to you about!

Perry (as Brandon): Ah, to be popular again!  (pauses)  What am I saying?  I was never popular.   I was voted "Most Likely to Be Voted Least Likely."

Everywhere, from all sides, Perry (as Brandon) is eating up the attention and acceptance.

Leona: Brandon, I wanted to say that being together yesterday was great!  I can't believe we did EVERYTHING!

Leona:  I can't believe we did EVERYTHING!

Leona: (giggles) Silly!  You know.  EVERYTHING!

Leona: (playful) I was really hoping this afternoon we could ... you know, do some more!

Perry (as Brandon): Yes, yes, I'm becoming Orthodox!  Actually, an Orthodox rabbi!  I won't be available for the next six months ...  I mean, six years!

Leona:  Brandon, are you feeling well?

As Perry breaks away from Leona, he stumbles into Benji.

Benji:  Brandon, comin' over to my house later?  We've got another batch of that Great Shit we had last weekend.

Benji:  Yeah,  remember?  Last week we had to scrape you off the ceiling it was so awesome!

Perry (as Brandon): (flustered) Oh .... that Great Shit!  That awesome! Well, thanks so much, but I've got to cut down on my scraping!  Doctor's orders!

Breaking away from Benji, Perry is buffeted about by the other students in the hallway, finding himself face to face with two kids sitting at a desk in front of a poster that reads "FUTURE TEA BAGGERS OF AMERICA."

Perry (as Brandon) races out of the school.

Perry (as Brandon):   Brandon, we've got to switch back!

Brandon (as Perry): I'll say.   Being in this body makes a night in the Bates Motel seem like a weekend at the Four Seasons.

Perry (as Brandon): Well, you shouldn't expect to be able to touch my toes right away.

Brandon (as Perry): Touch your toes?  I can't even wave to your knees!

Perry (as Brandon): (changing tone) You've got some things to answer for, mister!

Perry (as Brandon):  Like doing EVERYTHING yesterday afternoon with Leona Bushman, the Hottest Girl in All the Eleventh Grade!

Brandon (as Perry): Doing everything yesterday afternoon with Leona Bushman, the Hottest Girl in All the Eleventh Grade?

Brandon (as  Perry):  (calmly)  Dad, we did EVERYTHING on the book report we've been working on together in the library this week. We were going to do more today for extra credit.

Perry (as Brandon): (deflated) Oh.  (picking up intensity again)  But stay away from that kid with the Great Shit so awesome they have to scrape you off the ceiling!

Brandon (as Perry): You mean, Benji?  His mom's dynamite chocolate chip cookies?  Why?

Perry (as Brandon): (deflated) Oh.  (picking up intensity again)  But stay away from ...

Brandon (as Perry):  .... of course I have no intention of signing up for the Future Tea Baggers of America.

Perry (as Brandon):  Oh. (mildly) Glad we had this little chat.

Brandon (as Perry):  I've got an idea.  (approaches the stone and begins singing, if you can call it that)  I was just seventeen, you know what I mean ...

The stone begins to glow and in a instance the two are returned to their proper bodies. Each breathes a sigh of relief.

Perry: I didn't particularly enjoy passing up on things I would have enjoyed because I don't want you to enjoy them.  At least, not yet.

Brandon: That didn't make any sense.

Brandon:  Know what, Dad?  We ought to get rid of that stone.  Like Harry does with  Voldemort's wand at the end of Harry Potter.

Perry: Well, let's not be so hasty!  Maybe we could ... umm ... try it again, but instead of with you maybe with one of your friends who's kind of riff raffy?

Brandon:  Nah, I'm going to take it and throw it in the trash dump, Dad.  And then I'm off to the library.

Perry:  Sure.  (a bit sadly)  Say hi to the Hottest Girl in All the Eleventh Grade.

Brandon leaves. Perry gives a peculiar look, gets out the telephone book, and dials.

Perry:  Hi, is this Benji's dad?  Hello, this is Perry, Brandon Block's dad.  Y'know, Brandon's been bragging  about the chocolate chip cookies your wife makes,  and I wondered ...   Oh! She does bake cookies.  Happy to send me some? Scrape me off the ceiling, you say?  Thank you so much.

I like it. (What's a Tea Bagger? Is it as rude as the Urban Dictionary says it is?)

Funny as always Perry. Hmmm, should I also try going back to being 17? Nay!

Yes, that's the group, but the definition is a bit strong, even for me.

"Narrow-minded gun-loving moron," sums it up just as well, and so much more diplomatically!

Yeah, it's true. I don't really want to go back to being 17 either.

Thirty-two. Find me the stone that makes you 32. I'll ingest it.

Thanks for writing, Libby!