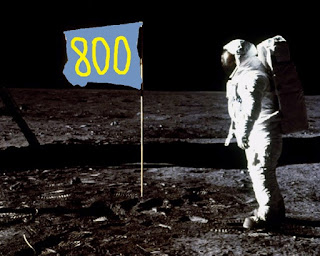 "And it came to pass that I looked down upon the Internet and I saw that it was formless and void when it came to humor blogs about neurotic ill-adjusted Jewish Baby Boomers.

And darkness was over the surface of the deep but fortunately I had a night light because I'm afraid of the dark.

And the deep too.

And I said "Let there be a humor blog entitled Perry Block - Nouveau Old, Formerly Cute" and I brought forth a humor blog about a neurotic ill-adjusted Jewish Baby Boomer. And I saw that it wasn't very good, but I had time on my hands.

And it was the evening and the morning of the first day, which is all it took because we're talking about a dopey humor blog, not the heavens and the earth.

And I blessed the blog --- as blessing things is sort of a hobby of mine --- and I bade it be fruitful and multiply. As in readers.

I'm still waiting for it to learn how to add, let alone multiply.

That was how it began seven and one-half years ago when I first started writing Perry Block - Nouveau Old Formerly Cute.

Back in that day there were very few if any Baby Boomer oriented humor blogs, so I thought I'm was going to be famous in no time, riding in limos, doing cocaine with A-List film stars, and having sexual relations with women of every race, creed, color, and political persuasion, but not Republicans.

I began writing in earnest but I had to rewrite the first several blogs in English because no one reads Earnest anymore. Some of my posts were funny but frankly some of them were unfunny.

Some of them were so unfunny that they turned those who read them to stone.

I'm very sorry for those of you whose family members read "Perry and Dick Cavett Do the Daily Jumble Together" or "The Sheer Joy of Quantum Mechanics." But at least your loved ones are with you forever.

Years later, except for the sexual relations with women of every race, creed, color, and political persuasion, but not Republicans except for a couple of Republicans thrown in for the experience, success frankly has not materialized for me.

But I've kept at it.  And along the way I've had fun with characters like:

The LOJM - the mythic creature who jumps in front of the camera whenever Jewish men of a certain age have a picture taken causing someone as young and handsome as me to look like a troll in the picture.  But kind of a cute troll.

The Legendary Jewish Vampire, Vlad the Retailer - over 800 years old and a blood-sucking creature of the night, but with it all, a mensch.

Cupid, the God of Love - who's resigned his position as God of Love and whose arrows no longer cause people to fall in love but only to admire each others' clothing.

Perry, the Bummed-Out Baby Boomer - one very neurotic, insecure, and regretful Baby Boomer who bares no resemblance whatsoever to me.  Except with respect to every single last fucking thing.

Many people have asked me  if I would share some of my patented humor writing secrets. I must admit they are not actually patented, but they have all had their shots and are available right now for adoption.


Eliminate all excess words from your writing. There is no better example of this principle than my funniest post ever:

If you are not feeling funny on a specific day, do not push the work. Have sex with prostitutes instead. Don't forget to call me first.

Writer's block?  Yes, I can tell you how to beat writer's block. You just have to... huh!  Funny, I thought I had something to say about that. I don't know.  Not sure. Drawing a blank here. Check me later.

Never use the phrase "I digress." That means you have ventured off the main path of your subject and are adding stuff that you think is funny but doesn't really belong. Get rid of it and use it elsewhere where it fits. And guess what? This is a real tip!


Still not feeling funny?  That's enough with the hookers. Time for you to go back to work. I'll take over.

I'd like to thank a few folks whom I have probably never thanked before for their support and encouragement: Don Holley, Tracey Lane Delaplain, Robert Siegel, Monica Kulaski, Merilyn Jackson, Kate Konigisor, Lisa Lynch, and Ilil Arbel.  Hey thanks, guys!

No, you can't have my night light.

See you again when we hit 900 posts. Provided I'm not busy with women of every race, creed, color, and political persuasion.

Damn, I just fixin' to digress and write something hilariously funny that had nothing to do with your 800th post. That's more than double my total over the same period of time. I'm sure you saw there were no Hillbilly Gentile humor blogs. That's why you begged me relentlessly (not to mention the monthly payments) to fill that void and write stuff that was only half as funny as yours.

I would like to thank you for being such a good sport and allowing me to feature you in several blog posts, and of course, the pilot for next season's hit TV series, "The Joys of Watching Paint Dry." I lobbied the producer to hire you as a co-writer, but he's afraid you'd make the show far too intelligent and way too funny for the deplorables the sponsors (Pabst Blue Ribbon, Cleo's Pork Rinds, and the NRA) are targeting. "No three syllable word, please," he told me regarding the script.

BTW - thanks for the writing tips. Maybe someday I'll be two-thirds as funny as you.

I guarantee if you follow those tips you'll be every bit as funny as I am. Which is as funny as 800 posts, almost 8 years, and 8 readers per post, and that's counting Calvin Coolidge twice. And I'd be pleased to do "The Joys of Watching Paint Dry" except I have to be careful since I did have a mild heart attack when I starred in "Watching Unicellular Creatures Evolve into Mankind in Real Time." Thanks for not digressing.

Lisa, here's a smooch back. I'm sorry about the tongue, but I just couldn't resist!