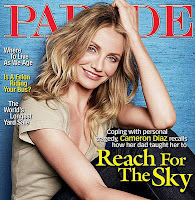 By Courtesy of Parade Magazine


Rose “Ma” Nishtanah turns from the stove, having tossed the last sprig of dill into her bubbling and internationally famous Matzoh Ball Soup.

“You know,” she says, “he’s never eaten so much as a spoonful of it, and yet I still love the guy anyway!”

At the kitchen table, Eustace “Pa” Rumpumpumpum smiles. “I know she and some of the children love it, but frankly it can’t hold spit to my delicious Safeway Cream of Mayonnaise soup!”

It’s like that a lot in the home of show business’ happiest mixed marriage, that of the iconic Ma Nishtanah and Pa Rumpumpumpum. Married for almost 35 years, the two of them keep their relationship flowering despite differences that’d make Sarah Palin and film maker Michael Moore seem like bunkmates!

Pa explains as he gives me a tour of the elaborate wood and metal working shop in the basement of their home.

“It’s the respect we have for each other’s traditions,” he says, “that keeps us going strong. She doesn’t bug me when I’m watching NASCAR, and I don’t bother her when she’s busy looking at Jon Stewart or some other Jewish-dominated mainstream media crap!”

Eustace Rumpumpum (as he was then known; he added the third ‘pum’ later when he was able to afford it) came out of a dirt-poor Arkansas town so poor it didn’t even have dirt to score a number of gospel based hits, including “Jesus Loves Me, But I Just Wanna Be Friends, ” ”Amazing Nancy Grace,” and the cross-over album that forever associated him with the holidays “A Glenn Beck Christmas.”

Rose Nishtanah's journey to fame began when her parents fled the Russian shtetl of Anapaquin to escape marauding bands of Cossacks which chased them all the way to 57th street before deciding to give up and sail back home. With a talent for song and dance, Rose became the toast of Broadway performing with her sisters as “Ma and the Joongs,” earning herself a nickname that would forever ensure her tons of free press every Passover.

Like Pa, Ma suffered a failed first marriage to the charming Irwin “Buddy” Berenson, a dapper Broadway ne’er do well who wore a pencil thin mustache because he had gambled away all the hairs in a regular size one. Smitten hard, Rose stood by Buddy as he systematically went through her Fortune, her Time, and her entire collection of National Geographics before dying penniless and mustache-less at age 43.

Both unlucky in love, Ma and Pa met each other on the set of the old “Hollywood Palace” TV program.

“I never realized how attractive a Jewess could be,” says Pa, “before she’d yet fallen under the sway of the Devil’s dominion.” For her part, Rose adds “I’d hadn’t ever dated a man who wasn’t a doctor, lawyer, or someone who’d inherited his father’s auto parts store.”

Within a week, the two were married and disowned by both sets of parents. Nonetheless, both credit their personal happiness as sparking the separate phenomenal success each has since enjoyed in motion pictures, television, concerts, Hadassah fundraisers, and “I Love the Second Amendment” bake sales.

“I have three wonderful children,” kvells Ma, “and three more too.”

“I dearly love all my children," Pa adds, "the Jewish ones almost as much as the real ones.”

With both still highly active in show business, we asked Ma and Pa what performers they each personally enjoy today.

“That Mel Gibson,” says Ma, “he’s quite an exciting action hero, and still such a dreamboat!”

“And I have always loved Ms. Barbra Streisand,” chimes in Pa. “She was so very affecting in Yentl.”

For a moment, each stares at the other.

Suddenly a steaming hot plate of Matzoh Ball Soup comes sailing on a direct course toward the venerable country star’s ever greasy head. It narrowly misses his pompadour and splatters off the wall behind the kitchen table. Pa swiftly sends his half-opened Budweiser in the direction of the sink, missing Ma but scoring a frothy hit on a nearby jar of herring.

All at once both of them break out laughing hysterically.

Sometimes our differences,” Ma Nishtanah and Pa Rumpumpumpum --- two halves of the happiest mixed marriage in show business --- say almost in unison, “are less than they seem.”

That should be true for us all.

Ma Nishtahah  -  name for the traditional "Four Questions" asked every Passover by the youngest child at the Seder. The questions ask "Why is this Night different from all other nights?" and go on to confound and perplex from there.

kvell - to express delight and pride.  I know, I know --- doesn't happen much with you and me.
Posted by Perry Block at 8:32 AM

Oh, that Ma and Pa! I think I met them once. Seems like it was at a Zen Buddhism revival meeting. They brought the tambourines.

Zen Buddhism is about the only cultural stereotype I left out of the piece, kd!

Then again, I didn't write it. The folks at Parade Magazine, while busily lowering the intellectual standards of the nation, were kind enough to allow me to reprint it.

I know the Jewish jokes are elusive to many. "Ma Nishtanah" is a transliteration of the opening words to the Four Questions, a staple of the Passover seder. Somehow it seemed an appropriate counterpoint to Pa Rumpumpumpum.

Aside from having fun spoofing Parade Magazine, I wanted to kind of leave it open as to whether Pa and Ma might really be happy. Perhaps they really do thrive on their differences --- or they are weeks away from splitting up for Jennifer Anniston and Jake Gyllenhaal.

Who knows? Who cares?

You cannot fool me.

kd, I would never even try!