One is the Loneliest Expression 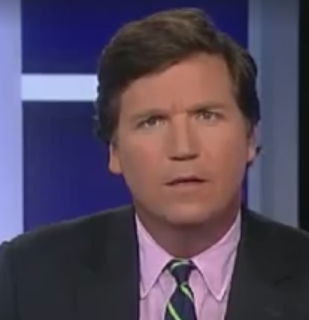 I'm not the first person to notice that right wing pundit Tucker Carlson, Fox News heir to the deposed Bill O'Reilly, has only one expression on his prep school graduate face.

Whenever he receives information from a guest that liberals and "the Deep State" have been sabotaging the otherwise gloriously successful President of the United States Donald Trump by spreading the vicious, scurrilous, and wholly malignant falsehood that Trump is a douchebag, Carlson evinces a sort of perplexed incredulity.

Haven't watched Carlson? Wouldn't stoop to watching Fox News? You can pat yourself on the back as you are wise, discerning, and true blue American! But then you won't understand this bit, so ...

Tucker, know why liberals are yanking Andrew Jackson off the twenty?
So President Trump will think Jackson is still alive and go batshit crazy that Jackson hasn't called him.

Tucker, Barack Obama is not a Muslim after all.
He's an alien from the planet Krengie and
WATCH OUT!!! HE'S GOT A RAY GUN!!!

Tucker, what kind of dumbass name is Tucker?

Tucker, one day President Trump will be on Mount Rushmore.
He plans to visit there first thing after he gets out of jail.

Tucker,  liberals are spreading the ridiculous lie that President Trump knows nothing about U.S. History.  Believe me, he knows all about how President Ford was shot in Lincoln Theater!

Tucker, you've been listening to me like I'm not insane.
I don't know the difference between Deep State and Deep Fat!

Tucker,
zip up that fly.

Tucker, about that video with President Trump and the hooker and the peeing?
When he sees that thing, even Vladimir Putin throws the hell up!

I can't wait to see Tucker's one and only expression in full display tonight when he listens to his guests parsing over today's news .... and all the news to come.

Ah, you landed! Maybe the problem is fixed once and for all! I'll be getting a veritable cascade of comments now! All saying I suck.

He is not a man, Perry. He is a Reptilian Alien masquerading as a human. The face is made of special Teflon-covered plastic.

But you were able to make a comment here, Ilil. I'm in business! The comments and the champagne will be flowing!

Oh, yeah, Carlson is of course a Reptilian Alien masquerading as a human with a face made of special Teflon-covered plastic.

Glad to see so many funny political posts coming from you. Sad to say, there's so much material.
Tracey

Actually, Tracey, there's too much! (See next post) And thanks for posting; it's so cool to see comments here for a change. From doctors even!

Wow, I haven't seen this many comments on your site since the day after Ford was shot in Lincoln Theater.

You're good at this political stuff. I can't believe Arianna Huffington hasn't put you on staff as a fulltime correspondent. Maybe if you'd quit stalker her, she would.

What's happened is that thanks to Kathryn Minicozzi the problem with posting on Blogger seems to be fixed. The comments are flooding in now! And soon, you and I will rule.

We may have to cut Kathryn in too. We can give her Spain. I'll take Europe. You can have Cleveland.