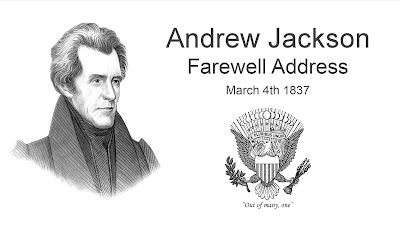 My fellow Americans, as I reach the end of my second term of office as the Seventh President of the United States, it is time now that I - Andrew Jackson - take my leave of all of you.

You are a great group of people!  Really terrific people!  So important.

I have to tell you, though, that I'm really angry because I see what is happening in our great country. And if I were to have been here a little later, 24 years later to be exact, you wouldn't have had --- Spoiler Alert --- the Civil War!

Friends, saying goodbye is very emotional for me.  I’m a tough person but I have a big heart. If I get started crying, it may turn into a trail of tears. Bad!

And now before I take my leave I’d like to share with all of you terrific people this delicious chocolate cake that was made at the Hermitage, the Southern White House, by my over 150 slaves. Even if you live to be 257, this will be the most beautiful piece of chocolate cake you've ever seen! 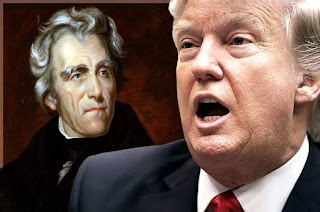 "I mean, had Andrew Jackson been a little later, you wouldn't have had the Civil War. He was a very tough person, but he had a big heart. And he was really angry that -- he saw what was happening with regard to the Civil War. He said, “There's no reason for this.” People don't realize, you know, the Civil War — if you think about it, why? People don't ask that question, but why was there the Civil War? Why could that one not have been worked out?"

"Sigh" back at you, Melanie. Thanks for commenting; here have a slice of the most beautiful chocolate cake you've ever seen!

I know I'm late getting to the party. Any cake left?

Andy was saving the most beautiful piece ever for you. So important!