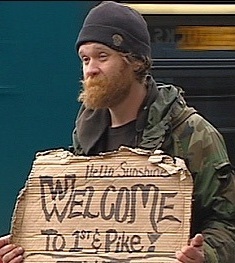 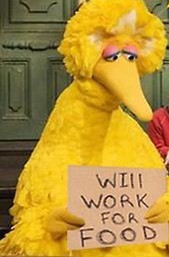 I fairly well couldn't believe it!

Hurrying through the East Concourse of Suburban Station in downtown Philadelphia, I almost tripped over him.

"Big Bird!  What the hell happened to you?!!

"Talk sense, Big Bird.  That' s when what started?"

"Day One of his presidency, Mitt Romney swept through Sesame Street with a gang of street toughs.  Two big guys held Elmo on either side while Paul Ryan beat the .... it wasn't a pretty sight!"

"That's nothing, what happened to David McCullough was even worse!"

"What could possibly be worse?"

"But where's everyone who used to live on Sesame Street?"

"Romney and his thugs dispersed us to the four corners of the Earth.  It became known as The New Diaspora, only instead of with Jews it was with hand puppets."

"Why couldn't you get some kind of  job?"

"I'm an eight foot bird with the mind of a child,  genius!  The only thing I got offered was  Greeter in Vegas."

"Couldn't you have gone on the government dole like the other members of the 47%?"

"Are you nuts? President Romney talks all the time about how he hates our guts!"

"Buddy, the only social program left is AFDCEO,  Aid to Families with  Dependent CEOs."

"Now where are you going ?"

"Over to the West Concourse." 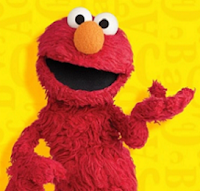 Hahahaha Poor David McCullogh, he is my choice for narrator of my life if Morgan Freeman tells me tae get tae.....

Better get Freeman then.

Doubt David McCullough will be able to sit down for weeks!

You screwed up and made a lot of sense, Perry. You'll ruin your reputation for sucking if you keep this up!

Thank you for catching that, Winonah.

With your help I will continue to suck on into the future and to infinity and beyond!

I think this is a nice little twist on the "L'Affaire Oiseau Grande," compromised a bit only by being a day or so late out of the box.

Big Bird relieves me of the self-deprecating role here and it's kind of funny to see him in that light.

Perry! You have Readers! I've been asleep (something like that) but I'm so happy I have been able to Read you ToDay. Unfortunately, well
...I thought my BigBird tears had subsided; indeed, my composure seemed to have returned! Then you had to report upon Elmo's debilitated state. I am overcome, Perry. Thank you for helping to spread the Word regarding these injustices...{sobs}...I believe it's all become too much for me {digs through closet for 1970's Sesame Street videos;rumbling storms of boxes tumble out, burying CherylFaith}

ps While I am overjoyed to see your lack of obvious self-deprecation here, Perry, we all know that Big Bird and Elmo are extensions of ourselves. To feel their pain, at least for this girl, is to experience intensely increased feelings of self-doubt; my self-esteem has completely escaped, to witness this sordid fate which has befallen my heroes...SIGH...{runs away in a flood of sloppy tears} Thanks, Perry <3 CherylFaith

It starts with how you're pleased I've foregone the self-deprecation here, and I'm feeling better.

Then on you go about the devastation and pain experienced by Big Bird and Elmo and how they're extensions of us and your self-esteem is destroyed, you explode in a flood of bitter tears, and ... worst of all ... I'm not getting laughs.

Where were Ernie and Bert when you needed them, BB? I just hope that they didn't go without a fight!

Sadly, they both became Republicans before Election Night was even over.

Ernie now works for Rupert Murdoch and Bert is Executive Secretary of the National Rifle Association.

Ernie, BTW, is known to be sleeping with Maria from Sesame Street.

So how are things in Babylon, Sue?