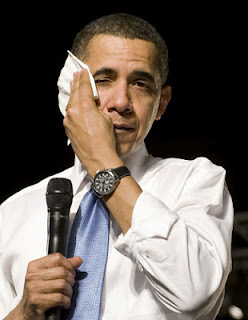 It's fairly standard practice in the days leading up to a Presidential Debate for both sides to busily go about "lowering expectations."

That is, minimizing your own candidate's debating abilities and style in such a manner that if he does indeed get his ass kicked, he can still claim to have sort of a nice ass. Following his less than stellar first debate, President Obama today unveiled a hastily revamped strategy for the rest of the campaign, centered upon the slogan:

"I don't have a chance in these debates!" said the President speaking in Madison WI. "I'm just a humble tongue-tied community organizer from Chicago up against the Winston Churchill of our Times!"

"Mitt Romney is a smooth talkin' rich white guy with distinguished  graying temples and just the right dab of grease in his hair," admitted senior campaign adviser David Axelrod. "The President has big ears and speaks in a faltering kind of stutter-stop manner.  He really should have taken Debating in high school!"

The "Knew I Shouldda Taken Debating!" slogan will shortly begin appearing on bumper stickers and lunch boxes as well as elsewhere throughout the Obama campaign.

"If things continue like this," said the President, "I wouldn't be surprised if come November I find my ass strapped to the roof of Mitt Romney's car!"

Instead of Jesus, Mitt has a Biden bobble head doll on the dashboard of his Hummer...between the debate and Biden that's one fine Hummer Mitt has..

A Biden bobble head sounds almost as much fun as a Romney one, except the Romney one jiggles even more when he changes positions.

Heads on Romney bobble heads, not made to withstand earthquake conditions,usually fall off within a couple of minutes.

The only Hummer is the Ho-Hummer sighed by the American people when they get a better look at Romney.

They are all a bunch of bobble heads...Voting libertarian this year. The big throw away vote...

I understand your reasons ... provided you see no distinction between the two.

Granted, neither of them is Abraham Lincoln. But one has a record of reasonable success (though clearly not in every area) and stands head and shoulders over the other in social issues.

We'll see what happens. At least we'll get some posts out of it, and comments!