In Xanadu, did Kubla Khan
a stately pleasure sukkah decree...

During the week-long Jewish holiday of Sukkot just now passed,  many Jews the world over build themselves a small primitive outdoor hut known as a sukkah.  Families typically take meals and otherwise spend quality time in this humble but hospitable abode which is oft topped with branches and other simple decorations of the season.

Because we had rarely had a sukkah during the years my kids were growing up, I decided that this year being the last one before Brandon goes off to college, I would go whole hog! Assuming, that is, it's appropriate to use the term "whole hog" in conjunction with anything Jewish.

"Brandon," I said on a day this past September, "this year we're going to build a sukkah, the best one we've ever had!"

"Won't be difficult to top that last one," said Bran, "unless we're using playdoh."

"No, this one's different, this time we're outsourcing!  The Pavarotti Brothers will be here to start work at 7:00 A.M. sharp Monday morning."

"Contractors, Dad?  What if they don't show up?"

"Come on,  a contractor not showing up?  Whoever heard of such a thing?!"

"And how are we going to pay for all this?"

"The Lord will provide, my boy."

"Brandon, you really do need this sukkah!"

And so I set upon an epic course of construction not unlike the building project undertaken by Cary Grant in the movie Mr. BlandingsBuilds His Dream House,  except that instead of a stately home in Connecticut, I was building a sukkah in Havertown PA.

All doubts to the contrary,  the Pavarotti Brothers  did in fact show up, although on a Friday a couple of weeks later than the Monday above mentioned.  Yet on that very Friday (actually it might have been the following Monday)  there they were along with six or seven of their best people at 7:00 A.M. sharp,  all busily hammering,  power sawing, and dump trucking their way into the hearts of our neighbors left, back, front, and rear.

From thereon construction proceeded apace,  though not without issue.  Delivery vehicles came and went, cement trucks roared and poured, electricians wired, roofers roofed, fiddlers fiddled while roofers roofed, and bills and charges ascended like Moses on Mt. Sinai.  There were serious cost overruns with the marble for the central hall Tabernacle, the imported gourds from Israel did not arrive, and we had to abandon plans for the elevator in the four car garage when it turned out Mitt Romney had scrapped the same due to excess expense.

At last, though,  the Dream Sukkah stood before us:   Me, Brandon, and the proud-as-hell newly-Jewish Pavarotti Brothers along with six or seven of their best people. Everything had been realized exactly as intended with the exception of the graven images planned for the frescoes in the master bath. Seems there's some kind of law or zoning ordinance or something against them!

"Well, Brandon," I asked, "what do you think of our sukkah?"

"Hanukkah Gelt?  But there's no chocolate coin inside, this is just the foil wrapping."

"Uhhh, Bran .... Remember what I said about the Lord providing and all?"

"There'll be a few cut-backs from now on." 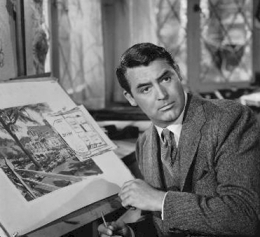 Cary Grant in "Mr. Blandings Builds his Dream House"
Of course I'm no Cary Grant.
This is news?

When it comes to sukkahs, you are my role model!

I do love learning new things and this tradition certainly falls into that category. I may be a goy, but I want a sukkah. Now, strangely, I also find (having just said it out loud), that I also want a sucker...and to watch old episodes of Kojak.

Yes, I said it and I'd be going to hell but fortunately, we don't have hell!

Thanks for writing, Brian.

It features a nice seasonal Jewish theme, contains some decent self-deprecating dialogue featuring Brandon trying to bring me back down to Earth as usual, and has a cool little twist at the end.

Of course, no great fan groundswell, but I knew that. Thank you for reading, though.