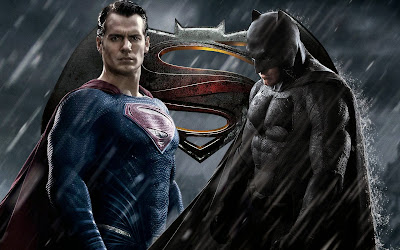 The recent release of a trailer for the upcoming movie Batman v. Superman has gotten a lot of people looking forward to seeing the film, and I guess I’m one of them.

I say “I guess”  because I’m sick of superhero movies.  We've reached the point of such superhero saturation that the new movie will also feature Aquaman, a superhero so insipid his greatest power is the ability to order mackerel to defecate on the bad guys should they happen to fall underwater.


I've always liked both Batman and Superman, however, but pairing them together in the same movie is kind of strange.* Superman is the most powerful being in all of time and space. Batman?  He has as many super powers as you and I except he looks a lot better in tights.

Frankly, Batman is only a big cheese in a universe in which there is no Superman.  So what does Batman have to offer the Man of Steel in a world in which they both exist?

Batman:  Great Scott, Superman, you're right!  Umm ... are you feeling sick, by any chance?

Batman:  Of course, Superman.  But first, we've got a few things to discuss.

Superman:  A few things to discuss?

Batman:  To tell you the truth, Superman, I'm sick of being the junior member in this partnership.  I want a broader role.


Superman:  But, Batman, I only need you whenever there’s Kryptonite around. That's the job: you pick up the Kryptonite, you put it in the box, and then go take study hall.

Batman:  Yeah, for which you pay me the grand sum of Superhero Minimum Wage!

Superman: But that's all the job's worth. Frankly I could get Aquaman to do this.

Batman:  Cool your pecs, Clark!  I want a raise and a company match in the "Strange Visitor from Another Planet 401 (k) Plan!"

Superman: But Batman, (cough, cough, cough!) aren't you a millionaire as Bruce Wayne?

Superman:  Okay, okay!  What do you want?

Batman:  Let’s make it 45 bucks an hour, a 6 % match, and a health care plan that covers having the shit kicked out of you by Bane.

Superman:  Sure (cough, sputter) sure, whatever you say!

Batman:  And I want you to help get the Superhero Minimum Wage raised.

Superman:  I am. For me truth, justice, and the American way is the Second Amendment, Fox News, and "let's impeach the Muslim President."

Superman:  You quit?  Batman,  where are you going?

Batman: Maybe you can get Kochman to help you out at Superhero Minimum Wage.

Batman:    Great Scott, Superman, I'm sorry!  Looks like maybe I am the hero Earth needs after all.


*Back when I was a kid, Superman and Batman were always paired in World's Finest Comics, which was anything but. The stories were silly and the artwork often second tier. Even when I was ten, I didn't buy it.

Great Scott, Perry! I can't believe what just happened. Batman basically went on strike and let Superhero Central shut down just like our government does when one party doesn't get it's way. KochMan must be proud.

I did learn one thing from this post--your mother named you after Perry White.

No, actually my mother named me after Perry Mason. The show was cancelled immediately afterward. Great Scott, thanks for writing, GayerMan (not sure I like how that came out) you saved me again from the dreaded No Comment Zone!

Glad to help fend off your arch-enemy.

Perry Mason wasn't even created until 40 years after you were born. Admiral Perry would be more like it.

Right you are, it was Admiral Perry. Right after my mother named me for him, he was cancelled.

Hilarious! And I agree 100% about the superhero movies. Get some new ideas, Hollywood!

Thanks, Anne! I remember when superhero movies were considered to be just for kids with budgets so small you could barely buy a box of popcorn with them. It was exciting for the Boomers when this all changed, but please ... it's time to change back for a while!