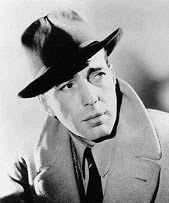 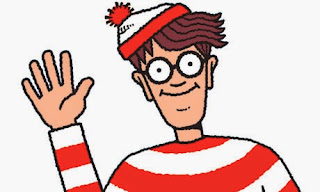 I've been living in Los Angeles for a good 5 to 6 years now, moving here by way of Cleveland Ohio.  I don't want to say Cleveland is boring, but I spent a weekend there once and it's still going on.

How did I get into this racket? I used to be Sam Kane, Finder of Lost Combs, Brushes, and Hairpieces. That was good money at $500 a day plus expenses until people caught on that all they had to do was look behind the toilet, under the car seat, or somewhere embedded in the neighbor's Afro.

So after a brief stint chasing down missing holidays, I’m working the missing persons beat. I'd like to say it's a living, but with three ex-wives and enough alimony to cause Sheldon Adelson to shout "OY GEVALT," that it could never be!

Well, I was sitting in my office on a Thursday afternoon that was so slow Chris Christie could have beaten it in a foot race when ... she came in.

She was a good looking dame in a short skirt with legs that seemed to go on forever, or at least as long as the run of Game of Thrones.  She had the look of upper crust all the way, champagne, caviar, and sex with guys named Reginald.

"So, Ms. Hot and Mysterious, what's your name?"

"Call me Sam, Ms. Moldavia. That way should we happen to be having sex later on you won't have to shout out "you're the best ever, Mr. Kane!"

"Mr. Kane, I don't like that kind of talk!  I have a serious request of you."

"I want you to find Waldo."

Waldo!  I certainly knew the name.  Half the city was looking for him. The boys down at the detective division had started a special Waldo task force headed up by my old friend Sergeant Brian Meeks, and Marlowe and Spade were also on the case.

"What do you want with this Waldo?" I asked Ms. Moldavia.

I always like it when a dame ejaculates in one of my capers. Hopefully it portends good things for me by story's end.

Ms. Moldavia showed me several pictures of the missing-in-action Waldo.  It was hard to imagine why a dame like her would expend a moment's energy trying to find a guy like him unless she was casting a remake of Revenge of the Nerds. He had a goofy grin and a penchant for red and white striped shirts that looked like Central Castings' idea of pirate garb for a Grade Z seafaring movie made in the mid-fifties starring Kerwin Matthews.

I took a healthy retainer from Ms. Moldavia, bade her adios, and set out to Police Headquarters to see if my buddy Meeks had uncovered any hot leads.

"Kane, I can't help you this time," said Meeks.  "Everything is hush-hush."

"Meeks, I don't like to bring this up," I said sheepishly, "but you recall that I did once save your life."

"You mean the time I got my zipper caught and you took my pants off over my head?  Okay, Sam, I'll give you a little something."

"As you know, Kane, Waldo likes to hang out in places where there are throngs of people.  Places like the beach, the opera, reunions of Billy Bob Thornton's wives. Usually red and white stripes are part of the scene. Odd, though, rumor has it he was last spotted in a department store where there were fewer people around than members of the Katherine Heigl fan club."

"Thanks, pal,” I called to Meeks as I began heading out.

Later that day while having my afternoon java at Lou Fielding's place I told my favorite hash slinger about the elusive Waldo and how he liked to hang out in mobs of people where stripes are part of the decor.

"Yeah, but those would be black and white striped jerseys ... wait a minute, Lou! That's it!"

"Please don't, Sam.  Contrary to my character's stereotype I am gay, but I'm not coming out before Tom Cruise does."

I raced to the Convention Center and there before me was an ocean of black and white stripes as far as the eye could see. There were referees not only for hoops but for every major sport save baseball, chain gangs suitably attired, zebras, zebras on chain gangs, referees on chain gangs ---- where many of them belong --- and of course, more zebras.  Many more zebras.

"I tried to warn you to stay away," came a voice behind me.

I whirled about to see Meeks with his revolver drawn.

Just then a bullet whizzed by me and Meeks hit the ground.  I saw the assailant at a distance, but even through the crowd I knew it was exactly who I figured it would be!

"Waldo, you bastard!" I screamed. “I’m taking you down!  And, by the way, that black and white striped shirt of yours needs major tailoring."

I leaped through a sea of striped humanity and dove at Waldo's ankles. I tackled him cleanly and slapped the cuffs on him.

"Who are you?" Waldo cried.

"I heard you were clothes shopping in a sparsely populated venue and let's face it, Waldo, you’re no fashion plate. When I learned about the referee conference, I realized you must have been buying a black and white striped shirt for the occasion and that I'd find your sorry ass here."

"Very clever, Kane. You think maybe ... I should have taken a medium?”

"No, but you are taking the fall."

"Sure. Everyone wants to find me, but once they do, they just want me to turn around and hide again."

"World fame and a paycheck fatter than Governor Christie.”

Made sense to me. So after I thought it over, I sprung Waldo loose and he vanished into the mega-striped crowd.

"I’m sorry, Sam,” said Meeks, holding his arm and catching up to me. “My eight year old wanted to be the one to find him first. Who is Waldo anyway?”

"The stuff that dreams are made of.  Low-level gamer dreams anyway."

There’s just a bit more to the story.  Before I cut Waldo loose I wrung a little concession out of him. Whenever and wherever I want, I get to find him. I always know "Where's Waldo."

And there are more than a few folks who show great appreciation for this unique talent of mine.

You can ask Ms. Moldavia, if you doubt it.

(Yep, it portended good things for me by story's end!) 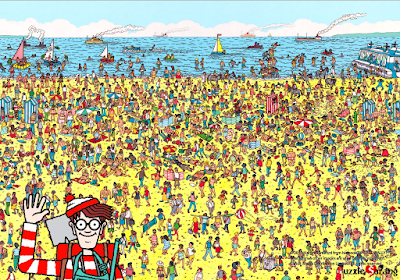 My thanks to writer and friend Brian Meeks for his gracious cameo in this story.  And my thanks also to Waldo who ..... crap, where did he go now?

Since you claimed to have a friend, I went to Brian's site and he said, "Perry who?" I did find this stuff entertaining, but even harder to comment on than BlogSpot.

I too have often wondered why people were obsessed with finding Waldo. Quite frankly, who cares where the hell Waldo is? You can't comb your hair (if you still have any) with a Waldo. He's about as interesting as Jared Fogle of Subway fame (net worth $15 million). But I am interested in one of those paychecks the size of Gov. Christie.

So am I. In fact I'll take a paycheck the size of Jared Fogel post dieting. (I barely remember those commercials, he's not still on where you are, is her?) And yes, Brian likes to write noir fiction so he came to mind for this piece, plus he recently joined my blog and sometimes I cast such folks in posts, provided they agree not to sue me.