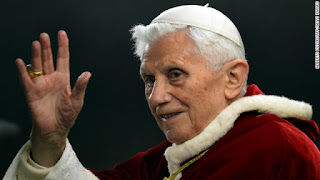 Been following the Pope on Twitter?  Since he's announced his retirement, the Pope's Twitterstream has been kind of bittersweet.

Here's a sampling of his latest tweets:

@Pontifex  Why am I resigning?  Just got a load of one of the "Requirements of Position" on my Job Description: "Must be infallible."  JESUS CHRIST,  that's ridiculous!

@Pontifex  Also my allergy to incense kicking up something awful.

@Pontifex Can I still speak ex cathedra? Yes, until God cuts service end of the month.  It's sort of like when you don't pay your Comcast bill except Customer Service is even farther away than India.

@Pontifex  Hoping I still get to hang with God somewhat.  I got the old "I'll call ya," but you and I both know how that goes.

@Pontifex Note to job applicants for position of Pope: be ready for question "what do you see yourself doing 5,000 years from now?"

@Pontifex  What will I miss most about being Pope.  The kickass clothes, dude!

@ Potifex  Now that I'm stepping down, how do I feel about gay marriage? Actually some of my best friends are gay and married, however, they're all married to Jesus.

@Pontifex  Would I ever consider becoming Jewish?  No way! That guilt trip is just too much!

@Pontifex Does God have a secret identity?  Naturally I'm sworn to secrecy, but, boy, will Lois, Perry, and Jimmy be shocked!

@Pontifex Am I able to do "you know what" at the end of the month?  Technically I'm allowed, but at this stage of the game the hottest thing I'm able to fantasize about is Mother Teresa without her cross.

@Pontifex Does God really spend time on NFL football?  That's so ridiculous!  Of course, occasionally he does rig things for the Saints.

@Pontifex What do I plan to do in retirement? I've already been offered two television commercials: one for reverse cathedral mortgages and the other is "Help, I'm falling from grace and I can't get up!"

@Pontifex Will I stay on Twitter?  Of course.  Beginning first of the month my new handle is @Benny_CoolPope.

@Pontifex Notice how some of my tweets are over 140 characters?  Yep, there are a few privileges to being Pope!


@Pontifex I've truly loved being your Pope!  Small favor?  Could several hundred thousand of you write me a nice letter of recommendation?

I suppose there are several other religions out there looking for a new CEO. He's got a sound resume and looks good waving from an upstairs window. Or, he could put a propeller on that hat and star as Jughead in the next Archie movie.

LOL! Not touching the Jughead comment, but he does look great waving from an upstairs window. He could be Grand Marshall of the Tournament of Roses Parade on a very long term basis.

Doubt he'd be interested in other religions, though, since he already turned down me down to take him under my wing in Agnostic Reform Judaism. Wonder why?