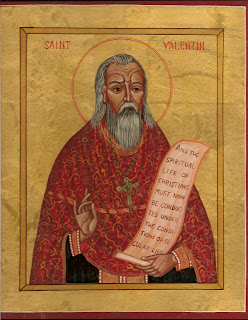 
A long time ago in the the second century in the city of Rome there lived a bishop named Valentine.  Bishop Valentine was a generally good man and certainly no bishopric, but he is remembered today more for a unique talent he possessed than for any positive shepherding of souls he may have achieved.

Valentine was a master maker of world class chocolate.  And since the greatest love of all is love of chocolate (Source: Anybody, except the late Whitney Houston),  he was adored by every man, woman, and child in all the land.

But the townsfolk were concerned.

What if Bishop Valentine were to stop making chocolate and spend more time shepherding souls? True, that would save countless folk from hell and damnation but what good was that without chocolate covered marshmallows!

So the people of Rome developed a special custom to show Bishop Valentine how much they loved him. Every year on his birthday, February 14, each resident of Rome would buy a red rose and present it to Valentine while simultaneously offering to him deep personal words of great affection:

"Roses are red,
Violets are blue,
I love you, Dear Valentine,
And your Mr. Goodbar too!"

"My Sweet Valentine,
So  forever divine,
Just dip my nuts in your chocolate,
And always be mine!"

"Oh, Darling Valentine,
I am your fan,
You always melt in my mouth
and not in my hand."

Remembering finally that it was February 14, Minimis hurried over to Valentine's Chocolate Shoppe clutching a red rose, but got there minutes too late.  Minimis flung himself upon the street and began sobbing.  He felt he would never again taste the Bishop's exquisite chocolate.

"Chocolate!  Chocolate!" cried out Minimis. "At this point I'll even take the stuff the Jewish people put in their Hanukkah Gelt, which tastes worse than eating actual coinage!"

At that moment, a pretty young girl named Dee was passing by. She had expressed her adoration for Valentine earlier that day and was carrying with her a box of  assorted chocolates from the good bishop. Dee took pity upon Minimis and bade him sample a sample from the sampler.

Enthralled by her gesture, Minimis took the lovely rose that he had intended to give to Valentine and presented it to Dee.  And as he did, he spoke the words that he had planned to say to the bishop:


"Be My Valentine,
Our hearts entwine,
Slurp a chocolate covered cherry,
Right off my vine!"

Minimis and Dee smiled at one another.  They looked into each other's eyes.

And then the two of them had sex like wild animals!

Nothing Dee Minimis about that (Ouch!)

Soon all throughout Rome couples on Valentine's Day began following the example of Dee and Minimis. One of the two would give chocolate to the other and receive back a rose.  The other would give a rose and receive chocolate.  They would refer to each other as "their Valentines."

And then they'd go at it with of  the fury of gladiators who like each other a little too much at the end of the day,  provided they were still breathing.

In a year or two the smarter couples began dispensing with the roses and each person would both give and receive chocolate.  And then do it even longer!

In just a few years no one gave roses to Valentine any longer.  This actually suited the good bishop just fine because the chocolate business was booming better than ever, and truth to tell, St. Valentine --- as he came to be called ---  actually hated roses.

They always tended to give him bishoprics.

I think this is where we came in.


If you hated this post, well then,  No Chocolate For You!

Is a sloth a wild animal? If so, will chocolate help pick up the pace so the sex doesn't look like time-lapse video in slow motion?

I dunno, Russell, but as you're the only commenter here today, please be my Valentine!

Yes, you can bring your wife too.

Your blog is, again, very informative and full of well-researched facts. From this article, I am no longer in doubt as to why Hershey outsourced their chocolate to Mexico.

People in Hershey, PA., why didn't you give the Hershey board members roses?

And once again, you've brightened my day, you currently cute valentine, you.

Why do you play with my heart in this manner? Don't you have any other toys? And must you keep trying to insert batteries? Batteries are already included.

Haha! Chocolates and roses are Dee Minimus to give on a day like today. :-)

Well, what do you expect? Dee and Minimis aren't exactly patricians.

And anyway, it was enough for those two wild animals!