Neither Rain nor Sleet nor Snow ... 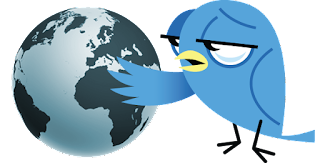 Twitter announced today that starting in August it will discontinue Saturday delivery of Direct Messages (aka DMs) to its worldwide network of tweeters (aka tweeps). This development matches the recent decision by Facebook to eliminate Saturday delivery of its once popular but now dismally performing poke, poking, poker, and pokee products

"We're in the same boat the U.S. Postal Service was in," said Larry the Bird, CEO & Official Logo of Twitter, "when it discontinued delivery of all mail other than the Burpee Seed Catalog on Saturdays due to losses caused by folks like us. Now we're the ones struggling to compete with new technologies like RealTalk!"


Get up and fucking talk to someone!

RealTalk users then rise from a seated position and seek out another human being within their home (i.e. a family member, friend, evil intruder) or elsewhere (friend, acquaintance, hot one night pickup) to engage in fully interactive interpersonal two-way communication.

"It's damn tough to compete against technology which enables you to see, hear, and talk directly in real time with another human being without even needing a PC!" moaned Twitter's Bird.

And hopefully neither rain, nor sleet, nor gloom of night can prevent it from one day dawning.

If you hated this post, you know what you can kiss? Bingo!

I had no idea they stopped sending mail on Saturday... Perry, you're funny and educational. How do you feel about that?

My wife seems infatuated with Real Talk. Personally, I prefer poking, but when I bring it up she usually changes the subject or goes in the other room and logs into Facebook.

How do I feel about that? Educational?

I thought you'd be the one logging into Facebook, Russell!

Keep poking, at least for now.