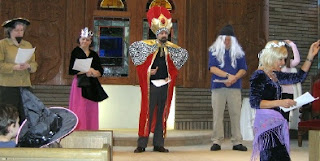 Sure Passover is more meaningful and at Hanukkah you get presents for eight nights if you work it right, but only at Purim do the Jewish people have both a Pageant and Carnival!

And this year Purim --- the Feast of Esther commemorating the victory of the Jews over the evil Haman in ancient Persia ---  falls squarely at the same time as the 2013 Academy of Motion Pictures Arts and Sciences Annual Awards.  Ya know, the Oscars!

LIVE ON THE RED CARPET
At the 2013 Academy Awards &
Purim Pageant & Carnival Celebration! 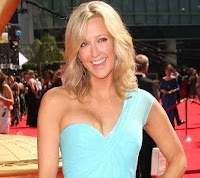 "Hello again, everyone!  I'm Lara Spencer from ABC's Good Morning, Insipid America! Tonight on the Red Carpet we'll  meet and chat with the A-Listers starring in the Academy Awards Purim Pageant and Carnival's retelling of the the story of Esther!

It's gonna be a BIG MEGILLAH!* 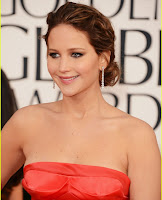 "Hi, Lara!  Hello, everybody! My first year as Vashti, this is so epic!

"Yes, it is a big year for you, Jennifer, what with Silver Linings Playbook and The Hunger Games."

"Forget those, Lara!  Here at the Purim Carnival we've got Carnival Games!  Including bean bag tosses!"

"Of course, Vashti is banished by King Ahasuerus for refusing to appear naked in front of his drinking buddies.  See that kind of modesty starting a trend in Hollywood, Jennifer?"

"No way, Lara. Ever watched Girls on HBO? Next thing you know Jonah Hill's gonna be droppin' trou!"

"And this next  face needs no introduction: The Legendary Bobby DeNiro!"

"Great to be back here as the King, Lara!  Haven't played  Ahasuerus since 1995 with Jimmy Woods as Mordecai!"

"How does the role of Ahasuerus  compare to your other great roles, Bobby?"

"So true, Bobby!  Tell me, are you going to make an uncomfortable rambling speech at this year's Purim Pageant?

"Of course, Lara, it's my trademark."

"We'll look forward to squirming through that!"

"Is there nothing you can't do, Hugh?"

"Make all the other guys in the world feel less insecure?"

"And now ... could it be ... yes, it's the annoying sound of hundreds of groggers!  Sounds like a swarm of bees that's just had lunch at Lance Armstrong's buttocks.  And here's  our Haman, none other than Christoph Waltz!

"It's wonderful to be here, Lara!  My first time out as Haman, so happy to be playing another great anti-Semitic villain."

"You've got big shoes to fill, Christoph, the role having been played by Mel Gibson for many years."

"Yes, it's a tough act to follow. And me with Jewish children yet!  If you don't mind, Lara, gonna go love me some hamentaschen!"

"And now all the way from the Princess Diaries to Queen Esther herself --- Anne Hathaway!"


"Oh, Lara, it's wonderful to play the Queen at Purim!"

"Gorgeous gown, Anne! How have you been preparing for this big role?"

"Married me a Jewish guy this past year, Lara, and for the last month I've done nothing but play Hang Haman!"**

"That's our great Purim Pageant cast, Ladies and Gentlemen!  The Pageant is going to be starting momentarily; for those of  you who want to watch the actual Academy Awards, it's on line somewhere, look it up.

And tomorrow on GMIA, we'll have exclusive coverage of me, Josh Elliott, and Christolph Waltz rockin' those Carnival bean bag games!

You won't wanna miss it!

Now if you don't mind, folks, gonna go love me some hamantaschen!

If you hated this post,  I hope you have a lousy Purim!

Now that is freaking hilarious!! And educational I have never heard of Purim...NO idea!!

You know, it's weird, I've been meaning to ask you about a gentile holiday I heard about last year called "Crispmas(?)" There's this big fat bearded guy in a red suit, kind of like a much older Zach Galifianakis, that' so freaking funny and I wanted to know ...

Oh, I'm DYING here, Perry! Love this. The Oscars can never live up to this - LOL! Thanks for the fun. :D

Thanks, Kathy. And believe it or not, I sing just as well as Seth MacFarlane and am 39 years old just like him too!

I've learned more about Jewish traditions in three months since I've been following your blog than in the entire previous 57 years. You guys have more holidays, festival, and celebration than all other religions combined + you're the Big Guy's choosen people. We Gentiles are green with envy.

Big Guy's Chosen People? Yep. We're so chosen that even we Jewish agnostics get to hang with him.

I'll put in a good word, Russell, should your status ever come up.