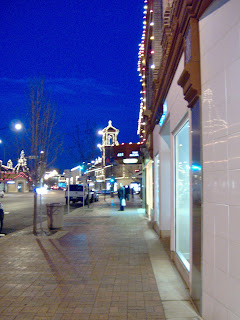 The lights were sparse at the entrance to the mall, but that didn't matter.  Somehow they were still causing excitement among the happy folk beginning to flock there for early evening holiday shopping.

He had never understood this holiday.  Never felt the excitement or the joy. Never understood why so many people were glowing, bearing smiles radiating from one red cheek to another, one person to the next.

He felt so alone.  Parties, gifts, friendship, love --- he experienced none of it.  Why was he an outcast at the festivities that seemed to gladden the hearts of all around him?  And what of the event the lights were supposed to commemorate?  The birth of a Savior? A Redeemer, the Messiah?

Damien, the Dark One.  Some Messiah!

Sometimes he felt he had just been born into the wrong parallel universe.

The above is my contribution to the Fabulous Friday Fictioneers. Picture prompt up top, story right below it. Still can't get my entries down to the prescribed 100 words,  but maybe I can line up a bit of special help for next time.

All Hail to you, Damien!

I'll give you this one shot, dude.

He never understood this holiday, Why the excitement or joy or why they were all glowing every December? Several more friendly, radiant smiles. Cheek to cheek, person to person.

Alone, no parties, gifts, friendship, or love --- he experienced none. “I’m a good person,” he thought, yet he was an outcast at festivities that gladdened hearts all around him.

What do the lights commemorate? A Savior’s birth? Chosen One? Redeemer? Messiah?

Damien, the Dark One. Born into the wrong parallel universe.

Thanks for the effort you put into this. It is very instructive in creatively hitting the 100 word mark and effectively makes the same impact as the original piece.

It's just not my writing style though. It may be that condensing into just 100 words will only work for me on rare occasions. I'll keep trying to condense. (I think I could shave a few words off the above and still keep the piece in my voice.)

Thanks again for trying to help! Liked your piece very much this week.

I enjoyed your take on the prompt. It's a thoughtful piece. All the gathering and joy celebrated at Christmas can seem like a stark contrast to the rest of the entire year. Almost as if it's forced on you. Nice job.

I'm starting to get the feeling the piece isn't clear.

The reason the guy can't get into all the apparent joy around him is that the holiday, which I don't name, is in honor of Damien the Dark One. He does live in a parallel universe and he alone has the same sensibilities that we do. He'd love actual Christmas if he lived in our universe.

Even with all my excess words perhaps I haven't made myself clear. Thanks for writing.

Thanks for explaining where you were going with this one - I wouldn't have taken that from the piece. I enjoyed reading this, and felt some sympathy for your character. I won't join him in his parallel universe though. :(

I took Damien as the Devil. Am I wrong? Definitely born in the wrong universe. Very gloomy piece.

Damien should have went shopping on Black Friday with Jason in my story last week. I'm sure he would have feel more at home with middle-age women threatening to rip his guts out over the last chainsaw.

Not poor Damien! He is the anti-Christ, the Prince of Darkness, the Chairman of the Republican Party ...

I wonder how I can fix the post to make it more clear without making it too obvious.

Thanks for writing, Rochelle! Appreciate your interest.

Thanks, Sandra. I think I have an idea to make it a bit more clear. If you happen to read it again, please let me know.

All Hail,Damien! At least in the parallel universe.

Well, technically the anti-Christ from the Omen movies but the Devil is fine. Not a nice guy.

Thanks for writing, Shirley!

That was a super post last week, Russell, in my view, the best one of the week.

I've made a few changes.

Perry, I didn't get to read it the first time but I got the idea from what's there now. So whatever you did, evidently worked. But the Chairman of the Republican Party? Really? I'm sure I'm not the only Republican in the group and I wouldn't even characterize Howard Dean that way. (I would follow this with the Dean Scream, but have no idea how to reproduce it in words. :-)

We need to get the narrator over here so he can enjoy Christmas!! Hope you had a great Thanksgiving.

If the dark lord got saved, would he be the dim lord?

Your humor cracks me up, good take on the prompt.

I love your story (and understood it) but must disagree with you about the whole "retaining your voice" comment in answer to Rich. Your voice is your voice. It will come through no matter what (and does).

As for the Republican comment, even though I am a liberal Democrat I actually meant to satirize the MSNBC type of Democrat who does find Republicans to be akin to the Anti-Christ. I have criticized both MSNBC and Fox News in the past.

But darn it, I clean up the post so it's understood and then make a joke that's not. Cannot win, this boy here!

The Dark Lord would take a dim view of that joke, but I like it!

Thanks for the compliment from me and Damien.

I made a deal with Damien for that voice and I'm glad he came through. Spending eternity in an Olive Garden will now seem lots less onerous.

Hi Perry,
Who cares about a few extra words? Doesn't quality trump quantity? Does size really matter and if it does isn't bigger better. You really went to the dark side on this one. The humor is there, but it's black humor. Oh wait, my head is twisting around and I can't stop it. Ron

Keep going and make it into a novella!

I tried to but when I got to the point of Damien throwing me on the kitchen table or against the wall, I had to stop.

Nice seeing you here, Gwen. Have a good weekend.

Look at your head twist! The way it did last summer. Twistin' time is here ...

Nice to see someone who truly gets into the spirit of the season.

I totally understood it, Perry, and it made me shiver. I feel for your MC. Is there any way we can pull him over to our universe? Poor guy.

I don't know if you changed the piece after the comments, but I think I understood you perfectly.
Maybe it's the kind of movies I/we watch. :-)

I dunno, Debra. A smiling Grinch just might entice him ...