How to Secede from America Without Really Thinking 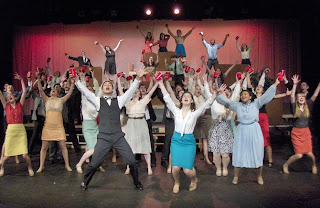 There is a Brotherhood of Dumb!

There's a brand new smash hit musical on Broadway these days,  and it's one with a very unique distinction.

It is the first ever all-singing all-dancing all-moron Broadway musical in history.  It is:


HOW TO SECEDE FROM AMERICA WITHOUT REALLY THINKING

Starring the greatest assemblage of idiots ever seen in New York City since any two or more people who take Donald Trump seriously, How to Secede tells the story of one J. Pierpont Simp, a young man who believes that President Obama is a Socialist-Communist-Muslim-Gay-Lesbian-Transgendered-Pickup Truck Hating-Agent of Satan Who Collects 15% on Every Booking He Makes for Satan maniac, who is also black.

This tuneful romp follows Ponty as he climbs the corp-hate ladder of an organization known as "The Brotherhood of Dumb," which seeks to secede from the United States because Barack Obama has just been elected President instead of a man whose major presidential credential was faking a middling love of NASCAR.

As Ponty, Broadway newcomer Ralph "Guns & Tats" Ferbish gives a performance that is so stupid he actually manages to drool saliva upward because he doesn't know up from down.   He is joined by Delilah Dimmish as Rosemary, a  woman who refuses to share a nation with anybody who doesn't believe the Constitution was written by Jesus and the Second Amendment given by God to Moses on Mt. Sinai but suppressed by the Jews.

The show starts off with the rousing "How to" ...

and wraps with the showstopper "The Brotherhood of Dumb" ...

"We're proud to put dumb front and center on Broadway," said producer Perry Block, a man often associated with dumb in his own right, "when it usually exists more naturally in Washington D.C."

"We feel that in the annals of dumb, How to Secede from America without Really Thinking compares favorably with the actions of some members of Congress who feel it's no big deal to go over the fiscal cliff because, after all, it'a only a ride at Disney World!

Go see How to Secede from America without Really Thinking, folks!

From your very own Broadway Buddy,

Frankly as the producer of "How to Secede," I hit my thumb square on the head and the nail goes scott-free.

Sure you can have tickets, kd.

Assuming you're willing to pay the price ...

I loved this, so true and yet so very funny :)

Love your sense of humor! :)

Five angry Felines stare me down, Perry, their eyes full of indignant daggers. With unaccustomed fury, they meow, "Who *is* this "comedian," Perry Block, who caused you to laugh with such force, that you interrupted our after-snack, pre-snack-mid-Evening NappyTime?!" They're beginning to encircle me now, Perry..."
<3 you! CherylFaith, soon to be muffledly screaming beneath a five-feline pounce-pack
O!DearGoddessPerry! Sooo funny!

Thank you, sir! I think I've found my true calling in "dumb."

Goes to show, all my teachers were right ...

Think I'd be a hit in Paris? Well, maybe I'll just stay a month or two. Fluff up the pillows and get my cognac ready ...

Always great to hear from poetical you.