My Luncheon with Barack 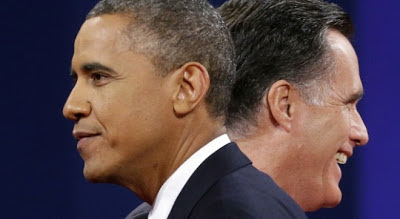 Today for the first time since the Presidential election, President Barack Obama and Governor Mitt Romney got together for a luncheon meeting at the White House.  With Americans at fever pitch to know exactly what took place, White House Press Secretary Jay Carney issued the following statement late Thursday:

"I am pleased to announce that  President Barack Obama and Governor Mitt Romney joined together today for a special luncheon meeting to discuss their respective ideas for the future of the United States of America.

After greeting one another in the Oval Office,  Mr. Romney offered his gracious wishes to the President for a successful four-year term to which the two toasted with a glass apiece of  Moet and Chandon Dom Perignon White Gold 1995, both men pronouncing it to be 'exhilarating yet not pretentious.'

Retiring to the White House Dining Room for the formal meal, Mr. Obama enjoyed oysters with carbonated lemon and fennel and Mr. Romney a salad of fall greens with English cucumber and bell radishes for which he selected a discrete dash of pepper from a properly over-sized wooden pepper mill. Mr. Obama declared his first course 'molto bene,' and Mr. Romney adjudged his 'excellent roughage.'

For their main courses, the President feasted upon grilled longfin tuna with pumpkin seed, eggplant puree, and sganarelle and Mr.Romney upon the slow roasted quail with creamed cunegonde, broccoli, and gremolata. Each man next eagerly loosened his belt to make ready for the final course of Turkish Coffee and Flaming Bananas Foster prepared table side and tres forte on the rum!

The President and Mr. Romney then  retired to the Oval Office where they enjoyed a snifter of finest White House brandy and a couple of excellent but odoriferous Nicaraguan cigars and agreed that everything possible must be done to avoid going over the fiscal cliff because the finest and most succulent seafood is on this side of the cliff!

The President and Governor Romney shook hands and agreed they would meet again shortly for another meal,  Governor Romney promising next time he'd pick up the check provided Mr. Obama doesn't raise his taxes too much.

Well done, Percy--I mean Perry. Hopefully, they won't have to dine on fried bologna at Mitt's expense. This is the kind of hard hitting news story that Fox News and CNN does have the guts to report. Thank you for sharing it with the world.

Thank you, Russell. I know --- nobody was telling the true story about what happened at the meeting, so I just had to break it.

Fox News had been accusing President Obama of lying about his poor table manners and MSNBC was saying Romney kept changing his mind about dessert.

By the way, I didn't forget the Friday Prompt. I just posted it now. I figure with two posts in one day there's a remote chance one of them might actually get read.