So Much the Same 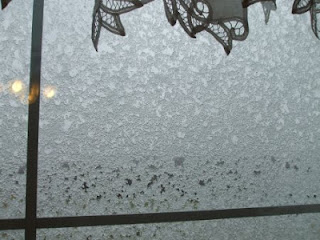 Obama returned for a four year term, Christmas commercials return to television, and I for another week return to the Friday Fictioneers for yet another go at a well prompted histoire.

How's that for a non sequitur?

I'm still a bit off the 100 word guideline this week, filing my little tale at about 153.  I promise if re-elected for another Friday term,  I'll for sure hit the mark.  But as with most political promises, don't hold your breath!

So Much the Same

Robert scratched his initials in the frozen glass on the window pane.  Just as he'd done when he was eight.

As a child, his icy initials seemed to signal the promise of wintry excitement, a snowy day, no school, sledding, snowmen, hot chocolate leading to blissful nap. But now at over 40,  his frozen fingertips etched out only resignation, blustery conditions to be braved,  frigidness to be endured, no matter how cold, no matter how deep, for work never stopped.

Two headlights shone through the frosted window, and Brad was coming in the SUV, coming to pick him up.

"Always fun to work this day," said Brad,  steam rising from his breath as Robert climbed aboard.

"Yeah.  And remember when the Fourth of July used to be hot?"

They're in Australia, right? Your imagery brought back my own childhood memories of those coveted snow days. And then again more memories of my children's snow days. Nice.

Rochelle, I think I might have muffed this one and I'm going back to take a second look.

Yes, it is memories of more innocent happy days on one level.

It is supposed to be climate change on another.

Lemme see if I can fix it.

Same comment as to Rochelle. Absolutely I meant this piece to be about faded hopes on the surface. But it was supposed to also indicate rampant climate change at the end.

How to repair? Thanks again.

I'd like this twice as much if it were half as long. :-) Sorry, I couldn't resist. I thought you meant climate change but it works on the other level, too.

Hi Perry,
I can always count on you and Russell for a laugh. I thought the climate was getting warmer. Your story reminded me of a day when I was living at 7,000 feet elevation and it snowed briefly one 4th of July. Ron

But is it unclear? Which of the two next to last lines works better?

There's no laugh though if it's not clear. Which of the alternate lines do you like better?

You know, this would have been a great prompt for a Hell Freezing Over story with Satan as the main character. One of us needs to do that next time.

Great story, Perry. I'll remember this one next time I scratch my initials in a frosty window (does a beer mug count?). Oh well, I owe, I owe, it's off to work I go.

Hi Perry, I thought the story worked as you had it with the final line you included rather than your alternative. I did get that the climate had changed. Just one small thing, I think perhaps it should be 'two headlights shone' rather than shined.

Works well as a story of inverse climate change model.

I think without the 4th of July line it would be clearer. That's what threw me off. But in the end it's your decision, Darlin'.

I think it's totally confused without the July Fourth line.

I'll think about it and make a change or two. Gee, writing in few words is harder than my usual verbosity!

...yes, I read it all. Global warming gone bad?

I am with Doug global warming gone bad, except my prayer and hope is that it gets warmer not scary cold...very well done

We should work on the Satan story together being we both keep him busy so much of the time. I've got a room made up for him at all times.

Yes, more fun to scratch initials in a beer mug, unless of course it's Budweiser... Thanks, Russell!

Made the change and appreciate your comment, Anne. And also I'm sticking with the original line as you suggested.

You are indeed a profit with honor!

Thank you, sir! Looks like I'm getting on the stick finally.

Appreciate your guidance and watch out for that iceberg!

You're right. I should have never used "globule" as word 101.

All the words after that are swell, aren't they?

I'll go for the warmer in real life too, but in the story I was going for the double unhappy meaning --- lost dreams and freezing temperatures.

Yep, just call me Mr. Sunshine! Which we'll be all out of if the story comes true.

I think that's about all he politics I can take this year, but I'm glad it was finally evident in the story here.

Frightening prediction: instead of Italian ice for the 4th, he gets black ice.

I was a bit confused, too, but on another note, I LOVE your bio!!! It's hilarious. Not sure why I haven't found you before now but I'll check back weekly. (And I must update/improve my bio--maybe you can help.) ;)