Most Obnoxious: Fox News or MSNBC? 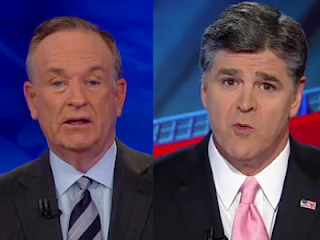 Fox News' O'Reilly and Hannity;
Obnoxious yes, but will they earn the brass ring?

At long last, everyone, it's time to vote!

Nah, we were sick of those two long ago.

It's time to vote in the all-important election to determine which of America's two most highly celebrated highly biased television networks is the most obnoxious:

In the right corner we have Fox News, that handmaiden of the Republican Party owned by Rupert Murdoch,  that hand queen of the Republican Party. These guys are so ideologically pure they make a right on a red and everywhere else too.  Fox News is as American as mom, apple pie, and an AK-47,  especially when mom is blasting away at the apple pie with the  AK-47 as target practice in case President Obama shows up to take away her guns.

In the left corner we have MSNBC, whose slogan is "Lean Forward As Long As You Lean Left." MSNBC believes strongly that the voices of all Americans should be heard except those of Republicans in the House of Representatives.  Ready to right every social wrong and always on the side of the angels, these guys prove demonstrably how hanging with the Devil might be a hell of lot more fun.

Ten Reasons Why Fox News is the Most Obnoxious

1) Fair and Balanced?   Fox News is about as "fair" as Hurricane Sandy and as "balanced" as Governor Christie on the opposite end of a seesaw with .... well, uh .... just about anybody.

2) Use of Sarah Palin as expert commentator highly questionable when the far more intellectual and articulate Victoria Jackson  continuously available.

3) Fox Special Reports all produced by ghost of P.T Barnum.

5) Miss Alan Colmes, Sean Hannity?  Without the goofiest looking liberal in America to make you look marginally handsome,  you have all the charisma of a  slab of meat but without the political insight.

7) Cynical use of babe anchors like Megyn Kelly calculated to mislead naive and impressionable younger viewers into believing there are such things in real life as Republican women who are hot.

8)  Sneering  condescending manner in which President Obama frequently referred to as "this President."  C'mon,  guys, haven't you ever considered the possibility that Mr. Obama may actually be "That President!"?

9) Attention, Charles Krauthammer: There are  expressions of which the human face is capable other than  grimacing.  Please try one next time you're telling Bret Baier how it's been a such "a  pleasure" to be spouting ideology with him.

10) Dennis Miller just as unfunny, self-absorbed, and annoying as a conservative as he was as a liberal.  Well, at least he's consistent in some things.

Ten Reasons Why MSNBC is the Most Obnoxious

1) Unlike Fox News, does not claim to be Fair and Balanced.  Virtually screams at you right up front that it is "Obama's Bitch."

2) Frothy the Showman:  Chris Matthews regularly raises frothing at the mouth to high art as he jaws open his show, interviews himself,  has dinner with himself commenting on the excellent dinner conversation, goes home with himself, has sex with himself, and goes to bed.   And the next day, he wakes up ....

3) And the Emmy  for "Most Blatant Misuse of High Intellect for the Purpose of Haranguing and Condescending Rather than Informing and Educating"  goes to .... once again ....  Rachel Maddow!

4) The Place for Politics?  I'll say!  Certainly not the place for anything nobler.

5) Advanced supercomputer required to count number of times in one hour Al Sharpton says "Mr. Romney has to be desperate to engage in such dishonest, fraudulent, sleazy, disgusting, and highly fattening campaign tactics as calling President Obama a "boinker!"

6) Advanced supercomputer required to count number of times in one hour Sharpton guests such as Dana Milbank, Catherine Crier, and even Ed Rendell  rocket back "Absolutely, Rev!" as if  programmed to do so by Rudd Weatherwax, legendary trainer of Lassie.

7) Sure as hell wouldn't want to be caught dead by Melissa Harris-Perry reading a copy of Atlas Shrugged when taking one of her political science courses at Tulane University.

9)  Guys, we used to be able to make fun of Fox News with impunity and without reservation. We had them looking like the idiots they are,  and you felt a need to copy them?!!

10) Chris Matthews?  Not a dick.  But can do a really  good impression of one.


So why should you vote in the Great Fox News vs. MSNBC Election? It's not as if there will be a winner, will there?

Well, remember what it is that you are voting for.  You're voting to determine which of the two television networks is the most obnoxious, not which one is obnoxious while the other isn't. That means that whenever you may watch one ---  should you ever watch one at all --- you already know that what you're watching is opinion/entertainment/bullshit and not at all the news.

And that, at the very least, makes you a winner! 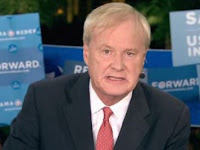 Fox is incredibly annoying and lies.
MSNBC can be annoying, but tells the truth.

But tells it so stridently and repetitively that after a while you start to think "what the hell are they hiding?"

Basically, the liberal side didn't need to create its own Fox News. We are the poorer for it.

We were just talking about this last night (after watching a few minutes of Chris Matthews). And I'd say it's a draw. No thank you to either one!

I wrote this because after years of knocking Fox News, I was disturbed that the Democrats/Liberals felt a need to create their own Fox News. What were they thinking?

No to either one is a good vote!

So I was atTire Barn getting a tire fixed, Fox News on in the waiting area, getting ready to change the channel after Megyn did her bit, and a guy comes in, walks over to the TV, and turns it up (as if it weren't abrasive enough), then stands right under the monitor. This prompted me to Google "most obnoxious news program", which led me here. Funny, good blog, Megyn is hot, but I vote Fox, hands down.

As I said before, Fox set the standard for misleading and annoying propaganda. Why did the liberal side, which more often has truth behind it, feel a need to copy them? Why sink anywhere near their level? We should be better than that!

I vote that Megyn is hot too and would welcome her as a Democrat.