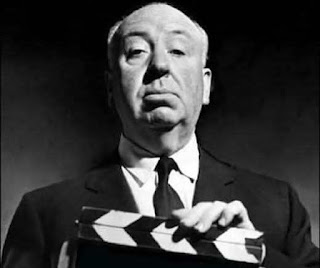 It was an unusually warm but otherwise quite typical day in early December.

That new movie about Alfred Hitchcock had just opened and as he was one of my favorite directors I put on a pair of slacks and a button down shirt and headed out the door for a pleasant afternoon at the movies.

Two men in dark gray suits quickly walked up beside me.

The two men flung me into the back seat of the car and sped away. Before long, though, I noticed the rear car door was open, made a lunge for it, and tumbled out onto the roadside.

"Mr. Kaplan, don't you want us to take you to Sid's Mufflers to pick up your car?" said one of the men. "It's a free service."

"You moron," said the other, "I told you his name is Mr. Block, not Mr. Kaplan. What, you think all Jews look alike?"

I tumbled onto a corn field and there up above was a crop dusting plane headed right at me, firing real live bullets.  I ran for my life!

"Sorry, buddy, not shooting at you," the pilot hollered back, "we find rapid machine gun fire the best way to get rid of aphids."

I flung myself onto a passing train and as I stood up in the section between two cars, a nattily dressed middle aged man approached me.

"I call everyone Charlie. You can call me Charlie."

Charlie then lunged at my throat!

"Charlie, why are you choking me?! By your count, there are at least seven billion other Charlies you could be choking! "

"I'm not choking you, Charlie, I'm straightening your collar!  Have you  just been chased through a corn field by a machine gun firing crop duster or something?"

I fell off the train into the middle of a busy city street.

"Scottie, I let you change me because I love you," said an enigmatic blonde woman in a gray tailored suit.

A black terrier ran in front of us and headed off towards a nearby tower.

Exhausted and with my leg hurting, I checked into the nearest hotel where  through a big picture window I could see all the hotel guests in the atrium. A burly gray haired man with glasses stared up at me with an air of ignorance and contempt almost as though I were a vagina and he a member of the Republican Party.

In a moment he was at the door, entering my hotel room!

In terror, I fell backwards into a chair, my injured leg extending straight before me.

"What do you want of me?"  he repeated. "I'm an Amway Distributor;  want any cleanser, detergent.  Need Amway's knock off of Depends?"

As I wasn't interested, he left and I went to take a shower to relax.  As the warm water cascaded pleasantly about me,  I  saw a dark shadow appear through the shower curtain. The curtain parted and there was a man dressed as a woman brandishing a long sharp knife!

"Forgot to tell you I also sell this 6-in-1 paring knife. Great for salads.  Dressed up like a women to show you how much the chicks love it!"

Throwing on pants and shirt, I ran out of the hotel. Up ahead was the theater where  Hitchcock was playing.  If only I could make it there, everything would be all right!

Then something pelted me on the head.  Then I was hit again.  Soon I was being pelted again and again all over my body!

Frankly, however, this happens to me every day.

As I reached the theater,  I grabbed hold of the back of a gentleman standing by the door and implored him to see me safely into the confines of the humble destination I had so innocently sought such a seemingly long time ago.

he turned around and said.

"Mr. Hitchcock!  What is this all about?"

"Knowing  you wanted to see this movie, Mr. Block, I thought you might appreciate the full Hitchcock experience."

"But, sir, you've put me though the most chilling parts of  just about every great movie you ever made:  North by Northwest, Shadow of a Doubt, Vertigo,  Rear Window,  Psycho, and The Birds.

"Which was it? Lifeboat? Notorious? Dial M for Murder?"

"The Man Who Knew Too Much." 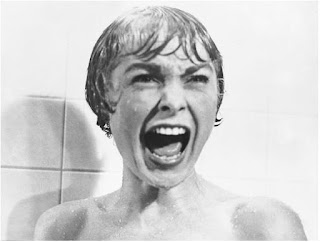 On second thought, maybe I will take some cleanser.

Oh, Perry. You know too much, but not everything. If you knew it all, you'd be obnoxious. And you aren't. You're just so darn cute.

Signed,
The Lady who vanished in a Lifeboat but hung on by a Rope out the Rear Window.

I think she meant "formerly cute." For a minute here I thought I was reading the script from the Marx Brothers 'A Day at the Races,' but the action was too slow.

Thanks, but as usual The Trouble with Perry is that you have to Rope in people to read him because I Confess he is the Wrong Man who hardly keeps anyone Spellbound.

Using Hitchcock for Award Winning Self-Deprecation. Now that I like!

Now there's an idea! I can write a boring post about them just as easily as about Hitchcock. I'm on it.

See you next Friday!