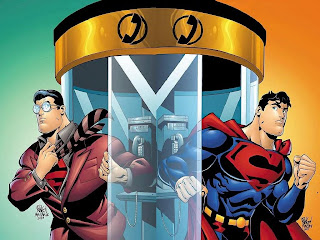 Superman, cut that crap out!

It's an issue that's been hotly debated since he first burst upon the scene in Action Comics # 1 in 1938.  Why does Superman need a secret identity? And where did he come up with the goofy name "Clark?"

A multiplicity of reasons  have been advanced for Superman's possessing a secret identity over the years, including:

1)   There's only one Superman costume and the guy can't exactly hang around in his underwear until pick up on Thursday (Wednesday, on fast service), can he?

2)   He likes lookin' smart, lookin' sharp in a three piece suit, and

3)   He actually is nearsighted, which means we're all in grave danger 50% of our lives because Superman can't tell Jimmy Olson from the Olsen Twins!

But forget all that!  Truth is Superman doesn't need a secret identity at all.  In fact, by hanging on to the Clark Kent alter ego he's squandering precious time he could be using to make life a hell of a lot better for you, me, and the entire planet!

Batman needs a secret identity.  It was Bruce Wayne who witnessed his parents' murder, who devoted his life to fighting evil and injustice, and who hangs around Sunday afternoon watching football, drinking beer, and yelling at the television.  Batman is the fiction, Bruce Wayne the legitimate guy.

But Superman began life as Ka-El from Krypton, not Clark Kent. Superman is the real deal, and Clark Kent the figment of our imaginations.

And it's about time somebody clued this Super-Dense Super-Dolt Superman in!

"Lex Luthor is destroying all of Metropolis this afternoon.  There's wars in the Middle East and starvation in Africa.  There's crime, pestilence,  and disease raging throughout the world,  and three more Nicolas Cage movies have just come out."

"Clark,  ever since 1938 those ridiculous glasses haven't fooled a soul."

"Well, do you think if I went to that glasses, nose,  and mustache ensemble, it would  make me look too Jewish?"

"Clark, aliens are right now crating up the blue states for transport to their home planet!  Can we get cracking here?"

"Sorry, Jimmy, I've got a couple of articles to finish first.  These stories about the new zoning laws won't write themselves."

"Please, Clark ... Rick Santorum is about to get the nomination for President!!!"

"I'm backed up with filing too."

"Yes, I do, Jimmy.  Without a secret identity, my friends would be in great danger if my enemies knew I was Superman."

"Clark, you hang out with the same three people as Superman as you do with Clark Kent! Everybody knows who we are.  Somebody tries to kill us every week!"

"Clark, you've been shtupping Lois as Superman for the last 17 years!"

"Sorry, Jimmy, I've got reservations.  Say, did you call Batman?"

"Bruce Wayne's at NASCAR all week."