The Legend of Radnor, Warrior Lass with Swords 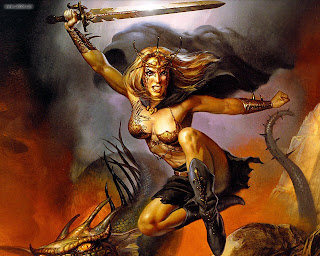 "Radnor, I bid thee," said Zeus as he turned about to face the lean muscular blonde warrior he had summoned urgently to his court, "this is a task only you can handle."

"My liege," said Radnor, "my sword and my honor are at your command.  As long as you don't ask me to do anything until March Madness is over."

Zeus stood to full height.  "I'm sorry, Radnor,  your bracketology will have to wait.  My Empire rests on how well you carry out this mission."

Radnor, Queen of Dogwood, Warrior Lass with Swords, was the mightiest champion the world had ever known.  She had conquered Anatolia once, Arabia twice, and Thrace thrice,  and was able to say that fast three times too.  Her fame had spread throughout half of the known world.  If only somebody could have spread her fame on the other half and folded the known world over neatly unto itself,  he could have had himself a dandy sandwich!

Legend had it that Radnor had once slain 100 men in a single battle.  That these were 100 very surprised men on her own side in that battle in no way diminished the achievement.  Ruthless in war, Radnor was known to be merciless to those she captured. She would place them in a line and arbitrarily cut off limbs, carve an "R" in their foreheads,  or spring a pop quiz covering material they could not possibly have studied.

Now Radnor stood before the King of the Gods.

She was not intimidated.  She realized that just like all other men,  Zeus put on his toga two legs at a time.   And only she knew that he wore a toupee.

"What is the trouble, my liege?"  she inquired.

"There is an upstart deity in another sector of the sky," answered Zeus.  "Name of Eloheim,  Yahweh, or sometimes called just plain God.  Ever hear of him?"

"But how does he do it, Radnor?!!!  thundered Zeus. "I'm busy as all Hades and I have a sub-god for everything!  In fact,  I'm putting on two more next week --- Simic, the God of Lint and Lamius, the God of Guys Named Larry."

"You've always been a little heavy on bureaucracy, sire"  answered Radnor. "Maybe  you ought to spend more time at your desk and less time on Earth chasing mortal chicks.  You can't keep carrying on as if you were still 427 years old!"

"But Dick Van Dyke just recently got married again at 84."

"Go, Radnor!  Find and destroy this God! Save my kingdom!"

"Eliminate Eloheim?  LOL, Radnor, that was a good one!"

Radnor raised her sword in salute of Zeus,  bowed humbly, and departed the Royal Court.  Awaiting her outside the gates was her loyal winged steed, the  legendary white charger Ernest!

Radnor and Ernest set off blazing across the Grecian skies.  Stopping only twice --- once for Radnor to stash Ernest's poop bag into the trash receptacle of some unsuspecting random Cathaginian guy and once more to ask directions --- by dawn  they approached the airspace over the land of Canaan.

There,  she saw the figure of a large bearded man floating gently above a cloud.

He was not a bad-looking man,  Radnor noted,  and the premature graying of his beard and hair was actually quite becoming.  Had Radnor been in charge of his grooming, however, he would have lost the ill-fitting purple check sports coat and wing tips.

"Holla!" shouted Radnor. " I am Radnor, Queen of Dogwood, Warrior Lass with Swords!  What might you be called?"

"My name is God," said the large fellow. "Got other names, but I'm into minimalism."

Already Radnor had found her prey!  She drew her sword.

"In the name of Almighty Zeus," Radnor cried, "Prepare yourself to meet your maker!"

"Well, looks like this is really working out for me."

"God," said Radnor, "I'm going to let you live.  At least until I can come up with a half way decent  cliche to dispatch you with."

"Good deal," said God. "But why does Zeus want to strike me down?  I pose him no threat."

"Heaven's, no!" laughed God.  "I've got my hands full right here with the Jews!"

"The Jews? Who are the Jews?" asked Radnor.

"They are my Chosen People," answered God.  "Wait til you meet them, they're so funny!"

"I could use a good laugh considering the deities I've been hanging out with," said Radnor. "What are you doing?"

"I'm contemplating my navel.  That is, the latest design for the navels I'm installing on the Jewish people.  Here, wanna see the blueprints?  I hired the firm of  Mishkin,  Blitzstein, and ...."

"These Jews of yours, God.  Do they ever act up? Worship idols? Kill each other? Eat from the Tree of Knowledge and then have sex with their tongues hanging out?"

"Yeah, that stuff happens all the time.  Want to see some of my case files?"

"What do you do when that happens?  Do you incinerate them,  eviscerate them, flood 'em out for 40 days and 40 nights?"

"Any of that crap work?"

"No, they still pretty much do whatever they want.  Especially on Saturday when I'm in the synagogue."

"God," said Radnor sternly, "turn that man into a pillar of salt, or butter, or something high in saturated fats.  Now!"

And God did as Radnor spake.

"But I don't think he feels better."

"God, you've got great possibilities," Radnor said, "but you've got to man up!  With my savagery, brutality, and viciousness and your omnipotence, we could kick serious butt."

"You know, God, this could be the start of a beautiful friendship."

"How do we begin?" saith the Lord.

"We're headed for Greece. We're going to make someone an offer he can't refuse.  Then we're into some major downsizing."

"First, I'm going to teach you all I know about plagues, pestilence, and the occasional pop quiz." 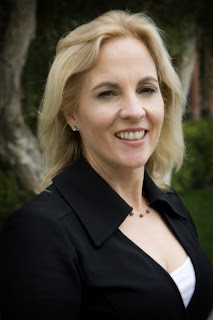 Radnor* as she appears today

Thanks, Leona. Five years later. Just happened to look back on this piece after all this time.

Hope you've been well all these years.