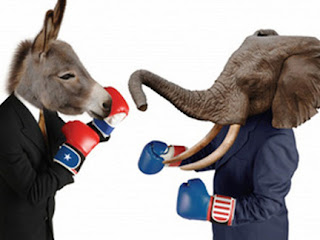 George Pristine wants your vote for State Senator from the 11th District of our state.

But what has George Pristine done to earn your vote?

Documented Fact:  Eight years ago, when George Pristine ran for County Commissioner, he called his opponent, Bill Flipper, a fine man and effective County Treasurer.  George Pristine said the County would be well served if they chose to elect either Flipper or himself as Commissioner.

Documented Fact:  Four years ago, when George Pristine ran for state legislature, he called his opponent, Haley Bailey, a hard-working and principled member of state government and said the only difference between Bailey and himself was their views on certain technical issues of state governance.

The verdict is in --- George Pristine refuses to engage in below the belt, mud-slinging, negative advertising!

The kind of advertising you want.

The kind of advertising you deserve!

Now George Pristine even refuses to attack Frank Sleazy, his opponent for State Senator in the 11th District.

And Frank Sleazy is a convicted embezzler, tax cheat, and alcoholic whose only desire in being elected is to use the trappings of office to nail as many babes as possible and to park his state-funded vehicle wherever in the hell he damn well pleases!

But what does George Pristine have to say about Frank Sleazy?

In the March 4 issue of the Daily Blister,  George Pristine called Mr. Sleazy an informed and articulate  spokesperson for the opposing party whom he looked forward to meeting in a free, fair, and open debate on the issues.

And you love it!

"I'm Frank Sleazy and I approve this message.

I also approve any other message which explains that my opponent George Pristine is a womanizing, drug-dealing, Communist scumbag who will come in the night for your wives, daughters, husbands, sons, and pets!