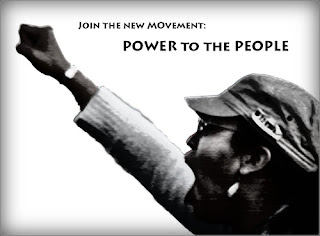 We are Volunteers of America,  Got a Revolution, Got to Revolution ....


I remember well the day I first joined the Revolution all that time ago.  In fact, I could hardly ever forget it.


I was walking across the manicured lawn area in front of the library when a large poster with red lettering caught my eye.  It was nailed to one of the front pillars of the library aside the twin oaken library doors.  It read:


Aside from my longish hair, generally liberal pre-disposition,  and stash of Joni Mitchell records, I hadn't been much of an activist up until then.   But  something about the poster piqued my interest.


Yeah, I craved whatever refreshments they might be offering, living on a budget as I was.   But I truly wanted to see what those people who were fully dedicated to the movement sparked by our generation had to say.

It was already 6:30 on Friday, so I hurried past the dorms to my small  apartment to get ready.  It may seem goofy now, but specially for the occasion I put on one of my three tie dyed shirts, the pink one with largest number of random white concentric circles all over the front.

Hobson Hall was already packed when I got there.  Although I knew a few people in the hall, there were many I didn't know.   Well, that wasn't really such a strange thing since I was living in a densely populated community with lots of college campuses all around.

I managed to get a seat up front and close to the podium.  And before long, out bounded the main speaker, a freaky looking dude in an army flak jacket probably from Nam,  long brown hair in a pony-tail,  and a fairly well mesmerizing grin.

"Brothers and sisters, thanks for coming!" he shouted.  "I'm  Jess Willard, organizer for the local movement."

The crowd applauded warmly.  A few shouted his name.  Obviously he was well-known among members of the movement.


"I'm talkin' bout our generation," Jess went on.  "Their generation thinks we're a bunch of freaks and crazies who don't understand the real world.  Every day we face their discrimination, prejudice, and ignorance."

He did have a knack for reaching an audience.    It didn't take him long to get the crowd with him.

"But we have a voice too," he went on, "and we proved it when we began speaking out against the war in Vietnam.   We have a voice, and they will hear us now!"

Many more began shouting his name, and  frankly I was starting to get into it too.  Yeah, in retrospect some of this was self-indulgent and narcissistic, I think I got that even back then. But that it was the time for our generation to speak up and be heard, that part was very real.

"Their generation controls everything!  The media, television, news reporting, advertising, the movies! They don't understand us,  and they don't try!  But they will hear us now!"

Now many applauded,  and some broke into cheers.  And he was right: the country was out of control and our generation had to be involved in setting it right.  I began to cheer too.

"Their generation has sold out to the twin gods of Money and Materialism!,"  Jess Willard thundered.  "We reject their values! And they will hear us now!"

When the thunderous applause subsided, I nervously raised my hand.

"But Jess," I said, "we sold out too.  Probably nobody sold out worse than us Baby Boomers."

"You're right, brother," yelled Jess, " we sold out too.   But, unlike them,  we feel crappy about it!  Every time I step over a homeless person on my way to Wendell, Billington, & Moskowitz where I'm Senior Managing Corporate Attorney, I feel like complete shit."

"Yes," shouted everyone in unison, "we all feel like complete shit!"

The crowd wheezed its approval!

At once, the spirit of  resistance and rebellion filled my soul.

And that was the day that I joined the Revolution, all that time ago.  Although I would have preferred the slogan be "Don't trust anyone under 61."

And Gens X and Y,  make NO mistake:

WE'RE TAKING YOU DOWN!

Email ThisBlogThis!Share to TwitterShare to FacebookShare to Pinterest
Labels: Baby Boomers, Boomer humor, Got to Revolution, Jefferson Airplane, My Generation, political humor, Power to the People, protest humor, Revolution, Sixties, the Who