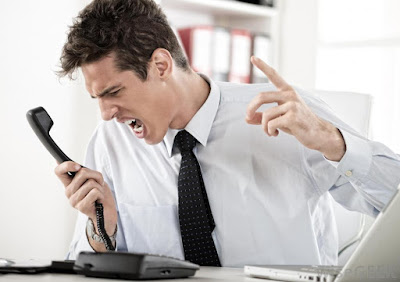 I was sitting at my PC wondering why on Earth I wrote the last blogpost just prior to this one, a comedic epic which garnered fewer readers than you need for a good staring contest, when my cell phone rang.

I'm original and creative in my ways like that.

"Hullooo, this is the Microsoft Company," said a heavily accented male voice, "and we have determined there is a serious problem with your personal computer."

Now I wasn't born yesterday --- although I wish I were because I'd still be looking forward to puberty --- so I responded to the caller in a frank but relatively restrained manner to indicate I was fully on to him and his nefarious ways.

"You’re not Microsoft,” I responded. “You’re a Microsoft Phony Phone Call! This is a scam to induce me to let you onto my computer so you can infect it with malware and then charge me exorbitant fees to clean it out.”

“No, sir, this is no scam!” he insisted. “This is the real Microsoft Company and your computer is in major jeep-ar-dee!”

Now generally when you get one of these guys on the phone at this point in the conversation they either summon up one more earnest attempt to convince you they regularly lunch with Bill Gates, or they just hang up.

But that was not this gentleman’s approach.

“And you’re an asshole!” he shot back.

Amazing! The phony Microsoft guy was ready and willing to debase the level of discourse below the depths to which I’d even been willing to sink.
But so challenged, I gladly descended to the occasion.

“Douchebag!” I snorted. “How dare you scam innocent people, Dickhead?!”

And then I paused.

Why do curse-word laden exchanges like these happen so readily in our lives? True, the pseudo Microsoft guy’s a sleaze, but maybe he just badly needs money.  Maybe this is the best job he can get. Maybe he’s got a wife who needs a major operation and the only insurance he’s got is from the Republican Party in a parallel universe where their half-baked health care bill actually passed.

And after all, I am one-half of this execrable exchange too.  He started it?  Nah, actually I kind of did.

I'd like to say that I then turned the corner on the conversation and returned it to a level of civility, appropriate remonstrance for his unsavory behavior, and onto final farewell.

"Go to Hell, You Microsoft Phony Phone Call Mother Fucker!"  I snarled, making sure to get in the last word as I slammed down the phone.

You see, I’m original and creative in my ways like that.

What? No have a nice day chewing on Turds and decayed monkey organs?

My brother had a great time with a telemarketer selling extended coverage on your vehicle. Pete acted all excited when the guy called, then led him on for ten minutes before telling him the vehicle he wanted covered was a 1961 two-ton flatbed truck. The guy finally hung up on Pete and never called back.

It sounds to me that your brother is the guy who called me. Dick Face! Shit Head! Ass-wipe!

Okay, finally out of my system.

I could give him your number, or you could call him. He prefers to be called Dick Nose, thinking that's his strongest feature.

I'll go nose to nose with him any day! And all I have to do is show him just enough to win.