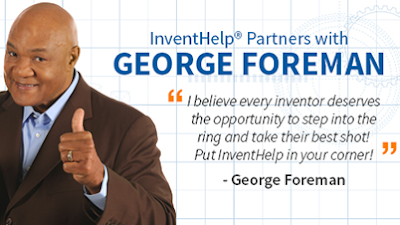 “Good Morning.  This is InventHelp.”

“Good Morning,” I said to the gentleman on the other end of line in return.  “May I please speak to one of the friends of George Foreman?”

“My name is Perry Block and I have an invention that I’d like to speak to one of George Foreman’s friends at InventHelp about.”

What?! For months, George Foreman had been telling me regularly on television that if I should need help with a new product idea or invention I should “Call my friends at InventHelp.” And now I had finally put together a contraption I believed some people might find a bit useful, and it seemed George Foreman’s friends were nowhere to be found.

I called my invention the BlockMaster 1000 Time Machine. I’d given it a dry run back to the Renaissance to meet Leonardo Da Vinci, stopped off in 1889 to spike Baby Hitler’s formula, and though you won’t fully understand this reference, isn’t the second President Clinton doing a heck of a good job?

“George Foreman is a famous boxer and celebrity,” I explained to the gentleman on the phone, “and a very likeable trustworthy guy. He’s sort of like the Tom Hanks of Boxing.”

“Fine, sir. But we have many well-trained specialists here at InventHelp who can also help you.”

“No, thanks. I only want to speak to one of the friends of George Foreman.”

“Really?  Well, do you have any acquaintances of Mr. Foreman there?”

“Anyone there who ever got a selfie with him?”

“An autographed picture then maybe?”

“An autograph on plain paper then? Even one on heavily coffee stained yellow note pad paper which is already smearing?”

“Ah, heck!  I guess you just can’t believe everything you see on television.”

“I’m sorry sir, but we have many InventHelp specialists here to help you.”

“Thanks, but no thanks. It's not that big a deal anyway.”

“Who was that on the phone, Roger?”

“It was odd. A guy who only wanted to talk to somebody who was a friend of a boxer named George Foreman.”

“George Foreman! I know you’re new here, Roger, but you should know George Foreman does our commercials telling everyone to ‘Call my friends at InventHelp.’”

“No, I didn’t and our system is down and didn’t record his phone number either.”

“Most of these inventions don’t amount to a damn thing anyway.”

Well at least the "legal empire" spam people like your "different post". Ha ha. I like to imagine you actually having these conversations. Funny business, Tracey

Yep, at least spammers like me. And you. And spammers.