A Round of Golf with Donald Trump

I haven't played much golf in recent years, and that's for a combination of reasons.  Lack of time, lack of skill, and a temper that's often caused my driver to travel a lot further than many of my drives has put golf deep into the back nine of the scorecard of my life for quite some time now.
That is, until I got a strange call from a familiar voice with a strange invitation yesterday morning.

"Perry Block, this is President Trump. How would you like to play golf with me at Mar-a-Lago this afternoon?"

"No offense, sir, but I didn't vote for you, I don't like you, and I hope to God they haul your ass off to jail for colluding with the Russians!"

"Who doesn't feel that way?  Now do you want to play golf or not?"

It was a slow afternoon in the middle of a slow life, so I decided to go.  And to tell the truth, he was a lovely host. He never once dragged me out of my seat on Air Force One, he has a great store of "pussy jokes," and after lunch he was literally beaming with pride as he approached me with:

"The most beautiful piece of chocolate cake you've ever seen!"

Soon we were teeing off on the first hole at Mar-a-Lago.  Mr. Trump hit a fine drive 275 yards straight down the fairway.

My drive went straight down the middle too, about 15 feet or so. And the rest of the day pretty much followed suit.  Frankly, Mr. Trump has a really nice swing for a big fat repulsive disgusting load of human fecal matter fit only to crawl back into the cesspool from which he originally and obscenely first emerged and befouled the planet.

Me, I managed to find my way into every sand trap, water hazard, and deep rough known to man and Robert Trent Jones.  I was in an out-of-bounds area on the 7th Hole so remote and uncharted I encountered principled Republicans there!

Finally we were at the 18th Hole, a par three with a short dogleg to the right.

"I'm afraid that's not going to help you with your base, sir."

Then I was up and incredibly I hit my best shot of the day.  It landed squarely on the green, bounced twice, and rolled right into the center of the cup.

"Gee," I thought, "very nice of the President to be so excited for me."

At once Steve Bannon jumped out from behind a nearby shrub.

"Yes, sir. Got the ball landing on the green and rolling into the hole with you and your arms outstretched just perfectly!


"I'M THE GREATEST HOLE-IN-ONE CREATOR THAT GOD EVER MADE!!!" said Mr. Trump modestly and nonchalantly.


Almost as soon as we got into the clubhouse I saw the news on CNN:

"CNN has learned," reported Fredericka Whitfield, "that President Trump has gotten a hole-in-one while playing golf alone at Mar-a-Lago."

"Now I get it!" I said to what's his name ... I mean, Bannon. "The President likes to play golf with a nonentity like me so he can take credit for anything good I might do on the course.  Bet he'd never try that with anyone else."

"Are you kidding? He'd try it with Kim Jong-un!"

And So, Folks, Happy Easter and Merry Passover from Me and Donald Trump!

I have to personally express the President's holiday wishes to you on his behalf because he went off to play another 18 holes. 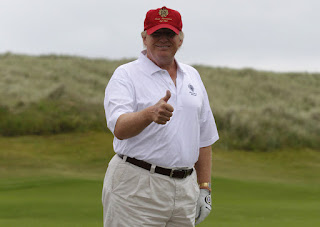 Now that's what I call a round of golf!

I kept scrolling down, waiting for you to share the good "pussy jokes" and all I got was some dribble about golf. Surely there was at least one about grabbing a girl by the pubic hair and dragging her down the aisle of Air Force One.

Some investigative reporter you are.

I pussyed out on the pussy jokes.