A History of the Failing New York Times 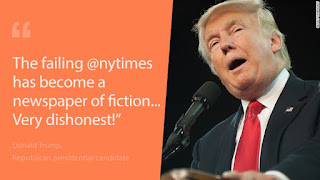 I remember well how it all started.

I hadn’t believed it when first I saw the reference in one of President Trump’s tweets to the “failing @NYTimes.” But soon there were unmistakable signs that the once venerable New York Times, purveyor of “all the news that’s fit to print,” was crashing and burning before my very eyes.

About six months ago I was reading a profile of Jim Jarmusch in the Arts and Leisure section of the Sunday Times including commentary on his most recent film, Pureed Gums. To my dismay the piece wholly miscalculated the total number of times Bill Murray has played the role of Bill Murray in films directed by Wes Anderson and/or Mr. Jarmusch (9, not 10, for goodness sake!) and seriously undervalued Jarmusch’s minimalist remake of Paint Your Wagon.

Frankly I wouldn't have been comfortable passing off as my own any of the insights presented therein!

The next week I noticed something else unusual. The Sunday Times had once been so voluminously thick that I required several trips to carry it into the house, sometimes having to make camp overnight in the driveway. But this Sunday I carried it into the house all in one trip, bench pressed it half a dozen times, and read it all while standing on one foot.

What was causing this plummeting quality and quantity of the Times?
Was it the effect of President Trump’s impact on the taste and culture of the nation? Was a man reputed never to have read anything more profound that his scorecard at Mar-a-Lago now dictating and establishing the quality of American journalism?

Serious errors now marred the Times’ former stellar reporting.  The Vice-President of the United States was often referred to as Hunter Pence --- a right fielder on the San Francisco Giants --- and Mike Pence’s batting average was frequently listed as “well above .250” despite the fact that Vice-President Pence has trouble with the curve.

Arts reporting slid as well.  Reviews of musicals were now completed by reviewers according to a form:

which was later simplified to:

Metaphors were now mixed like nuts, double negatives abounded, and the Oxford Comma had seemingly dropped out of Oxford and into indolence and heavy drugs.

Subsequent issues brought even more flagrant proof of the Times’ decline.  Nicholas Kristoff wrote a column with the headline “Will Write about Trump’s Incompetence for Food,” No. 15 across in the Sunday Times Crossword Puzzle yielded the answer “HELP ME!” and the Travel Section of the Times featured “Camden NJ, Which We Can Afford.”

The Sunday Times Magazine was now replaced by Parade Magazine Jr., a scaled-down version of Parade Magazine edited by former Olympic swimmer Ryan Lochte.  The paper was now printed on left over supermarket shopping bags culled by the few remaining staffers, who were instructed to always answer "paper" when given the choice of appropriate bagging for the skimpy groceries they were able to penny pinch to afford.

The word "Acme" was printed across many of the articles.

Just as it was about to close, the failing New York Times was acquired by a White Knight, that White Knight being Disney. At long last the Times made a welcome comeback for the nation's intelligent, thoughtful, and highly discerning readers.


Or should I say the failing Frozen? 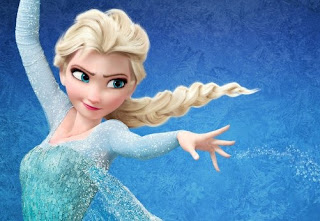 The same thing happened to the Goshen Gazette, our community paper. It once had as many as 50 paid subscribers and ran such riveting news stories as "Goober gets a new hat" and "McPherson's cow breed by artificial means."

Now, they're running stories about Clem Johnson's hay baler that are obvious fabrications. Who ever heard of a baler tying twine in a Granny knot, ridiculous. They're just lucky I don't have a Twitter account.

I could keep you pretty busy making up excuses for me.