The Colossus at Arkansas Roads - FF 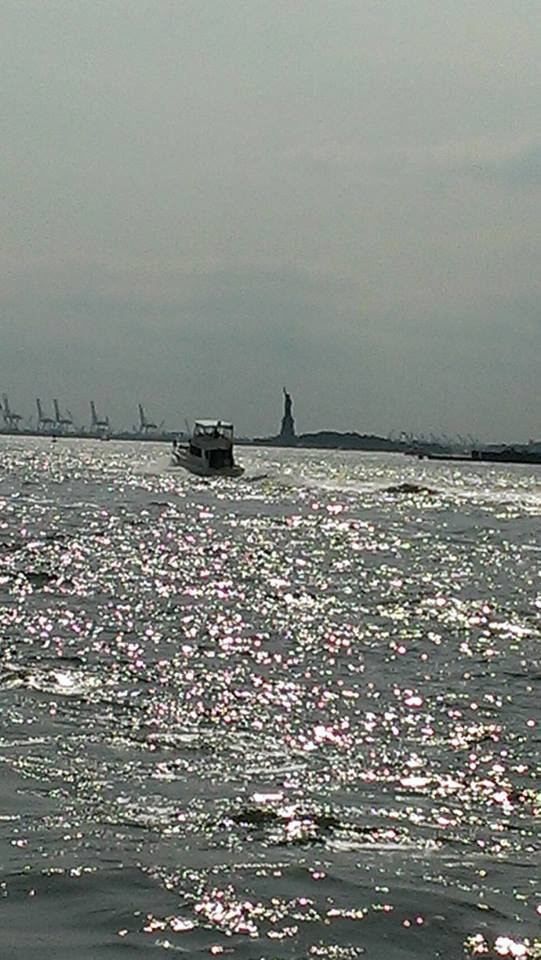 "Hey, Jason, I had no idea there was a small ocean you have to cross to get to Arkansas."

"What’s that big statue ahead in the harbor?  It looks like the Statue of Liberty!"

"Looks like it, but it’s actually the Statue of Russell Gayer, one of the leading citizens of the area."

"What’s that great big projection above his head.  Is that his arm?"

"No, it’s not his arm.  He actually designed the statue himself. You’re only seeing the part of the huge projection that extends above the head."

"Wow!  What a guy! Could that actually be the way he really is?"

"They call him Honest Abe compared to Russell."

The other Friday Fictioneers have inscribed their takes upon the picture prompt above which you can access by clicking here.

BTW, there's actually no ocean to cross to get to Arkansas, so I'm not being truthful either. Who knows, women of America, I may be lying about Russell as well!

I'm pretty sure you're not lying about Donald Trump though.

Ha.. Love the battering... I need to check back for Russel's comment

No, I'm not. At least Russell is more honest than he is. Not in the story above, but otherwise.

Russell doesn't have time to comment, holding up that thing, as it is.

You know, Perry, Arkansas used to have a senator named J. William Fulbright, although many in our state referred to him as J. William Half-bright. This leads us right into your story which is only half-right (like most politicians on one of their better days).

While we do not have an ocean, we do have squatter's rights to a large chunk of the Mississippi River. This lovely statue of me was built to commemorate my lasting contribution to humanity--the TOOTH BRUSH. Had this cleaning device been invented in any other state it would have likely earned the name TEETH BRUSH (I apologize to the rest of you readers for having to explain in such detail for Perry).

Like Debbie at Dr. Grace's office says, "Y'all only have to brush the ONE you want to keep." And that's the God honest truth or my name ain't Russell Gayer.

this made me laugh, totally. :)

Ha. Really funny, Perry. I think a lot of people in America might believe that you do need to cross an ocean to get to Arkansas, because well, they can believe anything it seems.

This, and Russel's answer are too funny. Why don't you two run for president? The world would be a better place.

Hilarious, Perry. You might just make a better President than Trump (actually most people probably would). You actually admit you lie. I really like an honest liar. :D --- Suzanne

I think I heard the sound of the drum..badum dump.