Take Me To Your Middle Manager 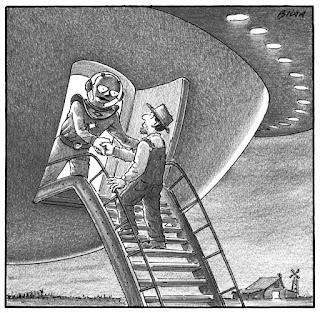 Sure you may come aboard, but be aware:
the place is a mess!

"Greetings, people of Earth!  We come from a civilization far less advanced than your own!

I am Simic, this am Zontar.  We are delighted to be here. I have a question for youse, people of Earth.  Do youse have someplace to pee on your planet? We have traveled many light years and we have not invented bathrooms for space travel yet. We have been holding it.

Youse are probably wondering how we speak your language.  We have monitored your radio and television broadcasts.  We especially enjoy your Duck Dynasty, Dr. Phil, and any cinematic artistic endeavors starring your Rob Schneider.

This is our monitoring equipment:  A giant paper cup attached to a string 50 billion light years long.  I told youse we come from a civilization far less advanced than your own.  It's a good thing Zontar's aunt saves string.

Now I must request:  Take me to your middle manager.

We would never bother your president considering how backward we are. How backward are we? The guy who invented rocks still has an active patent on them. The guy who discovered fire is still using it to get chicks!

You know what else? There's ain't no Jews on our planet. We have no entertainment industry, no lawyers, and you can't get a decent corned beef sandwich anywhere! Talk about backward!


In some respects we are a little like youse.  We have a national pastime named “ball.”  In our game you pick up the ball, hold it in the air,  and that’s it. It's not that much fun but watching it shoots a couple of hours when you've absolutely nothing else to do, just like with your baseball. We have politics too in which people are elected to office and then ain't nothing happens. I’m sure youse are far more advanced in that area than we are as well.

I guess youse are wondering how we could have built an advanced spaceship like this to travel to Earth.  Built it?  Nah, we didn't build it!  We found it on the beach.  Used one of those metal detector things.

By the way, the woman who invented metal detectors for the beach is the richest woman on our planet. As soon as we invent money I can tell youse how rich.

Would youse like to come aboard our spaceship? I'm sorry the place is a mess and there's no.... what do youse call it? ...  air conditioning.  It's just up the rickety steps right here.

Oh, by the way, now that youse are aboard, one more thing: We eat human beings, just like in all good sci-fi movies. We are now flash freezing youse with our patented death ray!

We may come from a civilization far less advanced than youse own, but everybody's gotta eat! Ain't that right, Second Officer Zontar?

Oh wait, you're Blurgteen Officer Zontar.  We've just got to get around to inventing numbers!"

I was always for banning pro wrestling on TV. It attracts the wrong sort of crowd...

Yes, it does. Human eating unadvanced aliens - the worst!

Just my luck. What a crappy time to be in middle-management. I suppose I could take them to a chicken plant and show them how we flash freeze animal tissue. Perhaps we could even mug them and steal their death-ray technology. Sound unethical?

Hey, I didn't make it to middle-management on brains & good looks, you know.

I know. It was pure looks. Had to be.