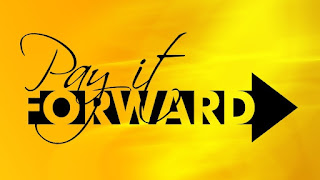 It happened in a very unlikely way from an even more unlikely source. But it made an impact on me and my coffee addicted self that I'm still thinking about.

A few nights ago I was buying a cup of large coffee in the nearby Wawa convenience store, which is  by the way the greatest convenience store in the world located right here in our Philadelphia area.  The cost: $1.80 - no king's ransom, but enough that I usually dispense a large cup of Colombian, gulp a whole bunch down right away, and then dispense more to fill the cup.

As I got in line, I eyeballed the guy in line in front of me facing toward the cashier. He had so many tattoos it looked like he'd fallen asleep in the chair of an insane tattoo artist snorting crystal meth. He was wearing those large round black earrings that some younger guys wear these days that look like ... well, the knobs you pull to dispense coffee at Wawa. Clearly he was not the kind of guy you bring home to your Jewish mother.

As the well-inscribed one purchased his beef jerky or whatever, he turned to his right side to look at me and turned back to the cashier and said:

"This is also for his coffee."

What? What did he say? Have I forgotten to wash out my ears the last nine months?

"Pay it forward," he smiled and was gone.

"Or in this case, pay it sideways," I remarked to the cashier.

She grinned and said "this happens more than you'd think."

Yeah, I wouldn't think it would happen at all. Obviously I'm a shit. But what a nice way to brighten someone's day!

The next day I found myself in another Wawa.  Behind me in line was a young man, no tattoos or coffee urn earrings, with a short stylish haircut I would have laughed at when I was twenty but which I wish to God I had enough hair to muster today. Time for me to pay it sideways.

"This is for his coffee," I said with a bright smile, turning to the young man.

"Why are you doing this?" he replied quizzically."You coming on to me?  I have to tell you, I'm not gay."

"Thank you, because I only wanted to..."

"But don't follow me out of here!" he scowled and was gone.

Notwithstanding this minor (and highly fictionalized) debacle in my attempt to follow in the steps of my well inked Wawa benefactor, I'm not daunted.  I will yet succeed in my efforts to pay it sideways.  Or next time, maybe even pay it forward.

But I've learned something: You never know where you will find kindness and class in this world.  Sometimes it comes from the most unexpected sources.

And although I may forget that in days to come, it sure makes me feel a lot better right now. 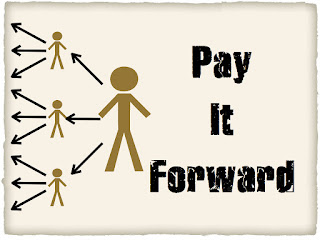 Or maybe sideways, as here.

Getting back to the early part of your story, exactly what kind of guy DO you bring home to your Jewish mother?

It's sad that the young guy was so suspicious of your motives. But as they say, no good deed goes unpunished.

Of course, he's fictitious, the tattooed guy was not. If I were a Jewish girl, I would bring Russell Gayer home to a Jewish mother. That way, after she passed out, anybody else would be acceptable.

There's nothing like setting the bar really low, is there? I'm glad I can do that for the Jewish people.

Thank you, Russell. You've even helped me seem palatable