If Money Really Did Grow on Trees 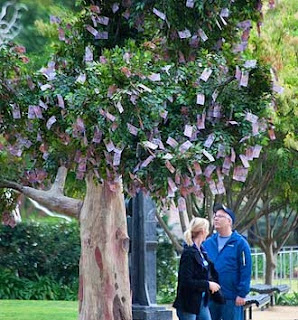 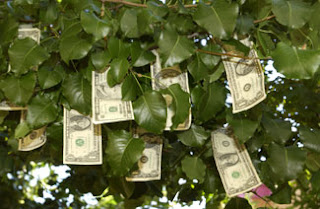 It is the first days of September.  This time of year, when the warmth of the sun begins to lessen and summer draws to its unwilling close, has always been a special time for my family and me.

For it is here on our modest plot of land in Northern California that we annually begin the harvest of the crops that our family has grown for over 95 years. In those shortening days of September we commence harvesting the one dollar bills, the tens, the twenties, and the Benjamins to be rushed fresh to the waiting wallets of good folk all throughout America.

Kropotkin Farms, our family business, is one of the largest independent growers of money in the State of California.  Our Moolah Mulberries, Lucre Locusts, and Dough Dogwoods have been third place winners in the American Association of Money Tree Growers (AAMG) Annual Arbor Awards for two years running. And it is our goal to provide you and your family with an excellent money vintage every year.

We are hoping for a fine vintage again this year 2016.

In September, our entire family except for our profligate cousin Herbie ventures into the vineyards to survey our newly grown crops.  Yes, they are virtually bursting with financial flavor! We carefully check the buds to make sure there is no pest infiltration. Naturally we grow all of our money organically to assure that Kropotkin Money will never be the root of all evil.

Should we find infestation of any kind, we take great pains to separate the tainted crop from the top dollar.  A boll weevil contamination last year inflicted extreme distortion to the $100 bill orchard, causing the image of Benjamin Franklin to look something like David Crosby.  This failed money can only be sold for nominal value, generally to the kind of Baby Boomer who likes to hum "Wooden Ships on the Water'' while picking out his plus 55 retirement home.

The inspection completed, all of the A1 crops are then plucked from our Folding Money Orchards, Coinage Bushes, and New York Subway Token Shrubs by a team of crack illegal aliens. There is not a moment to waste; if you miss the peak of freshness the New York Subway tokens will only work in Philadelphia.

Next our crops are processed on Kropotkin's modern third-rate equipment and necessary refinements are made, such as inscribing the fictitious words "In God We Trust" on all paper money and removing the language "We Believe in Humanism" as actually forms on money as grown. From there our produce is flash-frozen and shipped to happy money purchasers from coast to coast.

There are challenges ahead, of course.  Harriet Tubman seeds will be very hard to come by in the coming years. We will try to breed our own unique Tubman by putting a bonnet on Salmon P. Chase. We are confident we will be up to the challenge, just as when we first added a beard to the clean-shaven as grown Abraham Lincoln in 1937.

It is the pledge of the Kropotkin Family to provide you with the best money that money can buy.

From our table to your table, assuming you count your money on your table, we wish you "Delicioso Dollars!"

Arborist here in Arkansas have been working on a hybrid three dollar bill since the eighties. The original plan was to cross-pollinate a Susan B. Anthony coin shrub with an Abe Lincoln white ash, then meld the offspring of the two with a Thomas Jefferson juniper. If all had went according to plan, the currency produced would have featured Bill Clinton's portrait on the front and a crumpled can of Billy Beer on the back. Unfortunately, the closest we've come is a two-and-a-half-dollar token with Mike Huckabee on the front and an empty KFC bucket on the back. However, we are seeing some success with the new five, which we refer to as the Hillary Half-Ten.

Sounds wonderful, but I also saw your TrumpBucks. Don't you know you're supposed to process out "I fed Ben Carson those ativans just for fun" and "Frankly Melania scares me sexually?" If he wins, you'll be buying your TrumpBucks from me!

I'm sure nothing would make Donald happier than having his mug plastered on paper currency. Perhaps he should rename the country, THE I ALONE. NATION of TRUMP