A Billionth of a Second and Baby Hitler Too 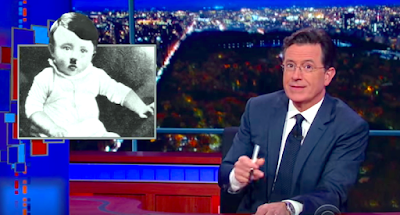 Move over, Stephen!  Baby Hitler is mine!

Thank you, ladies and gentlemen!

It is indeed an honor to have been chosen – and I’m still not quite sure how - to pilot this first ever flight of the incredible Time Cruncher Machine invented by the great Dr. Heinz Kropotkin!

And I am thrilled to be personally undertaking the mission to which I have been assigned – and I’m still not quite sure how - that most momentous and cosmic mission of all time:

The Killing of Baby Hitler!

Now some of us had thought that a mission of more limited nature might be more appropriate for the initial trial flight of the Time Cruncher. Rather than killing Baby Hitler I had proposed we travel back to 1970 and stop the band ABBA from ever forming.

But Professor Kropotkin  - go figure - actually seems to like ABBA, and so I stand before you today ready, willing, and able to begin the quest to turn Baby Hitler into Baby Toast!

Now I will step into the Time Cruncher and spirit myself back to the year 1889,   where I will once and for all put an end to that horrible scourge upon humanity known as Adolf Hitler, while still in his neonatal Nazi diapers.

“I think you’re right! You are me, only not as handsome. How can we be in the same place together at the same time?”

“Umm, how ahead of schedule are you?”

“Guess I should have practiced a bit more with the billionth of a second time lander!"

“Well, you tell me: Do you happen to be familiar with something known as World War II?”

“First I threw a grenade at Baby Hitler.  But he lifted his right arm stiffly, jerked it high into the air and deflected it!"

"Where did a baby learn a move like that? Then what?"

"I tried to sneak behind him and chloroform him.  But his mustache absorbed the fumes and the sides were burned completely off. I'll bet it'll stay that way for life!"

"Did you try anything else?"

"I set his crib on fire. But he stood up with his toy goose and stomped out the flames!  I never saw such goose stepping!"

“No, you must!  I did do something back there that ought to have truly helped the world.”

“You know how Hitler didn’t like one particular group of people?”

“I switched that group to sports fans from North Jersey!”

“Why, that’s the one thing about Hitler we've always liked!”

“There you go, that’s the two of us in action!”

“OMG, I’m starting to de-materialize right now! It’s time for me to leave.”

“Bye! Have fun having sex with my wife!”

“Hey, I will!   And what’s great is, I’ve got a whole extra two minutes, three seconds, and two billionth of a second to do it in too!”

Ah, 2 minutes, 3 seconds, and 2 billionths of a second. You really know how to satisfy a woman. Did you fall asleep immediately afterward too?

Too bad about ABBA. Maybe you can get them on the next trip.

No, I knocked them off on this trip, with Baby Hitler's help. He hates them too.