You Mean to Tell Me I'm Typecast Forever as the Actor in the Actor Portrayal who has Gout? 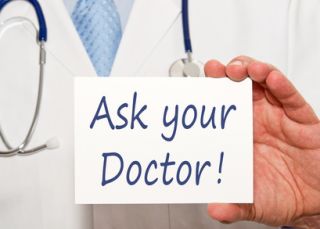 Look, Sammy, I know you've been my agent for almost 15 years now, and, yes, you've done an awesome job!

You got me that series with Paul Reiser and Steve Guttenberg about two Jews running a farm, Hebrew Hoe-Down, and I loved playing the wise-cracking Amish neighbor. And I was truly devastated when the show was cancelled in the middle of the second episode.

But, Sammy, in the last five years all you've gotten me is the actor portrayal of the guy with gout whose life is turned around after he asks his doctor about Jobomin!  All I ever get to say is "With Jobomin, Gout is Gone!"

You mean to tell me I'm typecast forever as the actor in the actor portrayal who has gout?

But I am an act-or, Sammy! I can act any disease you want including a full range of phobias, especially fear of being an unemployed actor!

What's that?  Nobody will accept me in any other role ever again? People will lose faith in Jobomin if they see me playing golf with Arnold Palmer or singing “tomorrow, tomorrow, I love ya, tomorrow?” with my last dying gasp to a baby?

How do you know this? All those actors tried it, you say? Took roles unrelated to their actor portrayals, you say?  Out of the business now, you say?

Selling siding, you say?
But I played Hamlet in college!  I electrified them with "To be or not to be!"

Better get used to electrifying them with "If you can handle the vomiting, sexual dysfunction, and high probability of painful hemmorhoids, Jobomin may be right for you?"

Only if they write in a character who has gout and goes to an 18th century physician and instead of leaches gets Jobomin?

This is terrible! I can't spend my life only playing guys who have gout. I can't keep saying over and over "Ask your doctor if Jobomin is right for him, let alone you."

Hey, what if they bring back My Mother the Car?

As the radiator, you say?  And no gout necessary?

Well, one can always hope.

I had my first attack of gout 3 or 4 years ago. Before that, I thought it was something that only happened to old people. After all, who ever heard of a handsome 50-something being stricken by an overabundance of uric acid in their joints. Until that time, the only problem I'd had with joints was poor quality paper or the stuffing falling out.

The thought of you being stereotyped as an actor portraying an actor with gout is callus and insensitive on the part of your agent. I bet you were fantastic in Hebrew Hoe-Down. I think they should resurrect the show in the fashion of Hee Haw, call it Hebrew Haw and cast you as the wisecracking, banjo playing Grandpa Schmuckelstein. It might even run 3 episodes before being cancelled.

Gee, I didn't even really know what gout is. I just thought the phrase "gout is gone" was funny. I hope you don't really have it because it would sure be a shame for a handsome 50-something to have it and also kind of a shame if you had it. Anyway I hope you took Jobomin and gout is gone so that when it's time to cast Grandpa Schmuckelstein, you'll be ready to go because I'm still doing the damn Jobomin commercials!

The bad news is I'm not longer a 50-something, but the good news is I am still dashingly handsome and extremely humble too.

If you really think I can land the Grandpa Schmuckelstein role, I'll hurry into the kitchen with Dinah brush up on strumming my old banjo.

I have always found you dashingly handsome, it's true. That's because you comment on my posts which no one else on the planet does. Even if you were actually uglier than you are (hard to imagine!) I'd find you dashingly handsome. So keep it up, you cutie patootie! And I never want to hear you playing banjo but I think I do want to meet Dinah in the pantry one of these days.