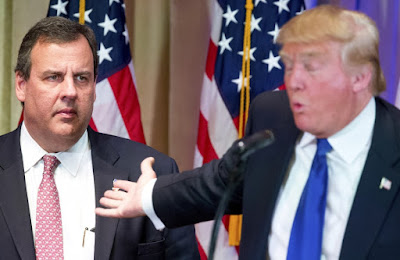 I used to feel that it was totally wrong and inappropriate to make fat jokes about Governor Chris Christie of New Jersey.  Love him or hate him, his size was something largely beyond his control and jokes about someone's girth can be very cruel and hurtful.

Of course, I made fat jokes about Governor Christie all the time. They were just too hard to resist.  But I at least had the decency to feel like crap about making them and to flagellate myself daily for being such an insensitive boorish lout.

But things have changed. Christie has allied himself with Donald Trump, proving that he is a shameless opportunistic phony who cares more about his own personal advancement than about America and its citizens.  And also he is
a big fat fucking slob!

1) What happened for the first time when Chris Christie ran for President.
He bit off more than he could chew.

2) What happened for the first time when Chris Christie ran for President.
He ran.

5)Why was Chris Christie never indicted in the George Washington Bridge Scandal?
He couldn't fit through Bridgegate.


6)Did you hear the news?
New Jersey has just declared hot fudge an endangered species!

7)What's the most Chris Christie has ever eaten at one time?
Well, it could be, but we all know what a liar Trump is.

9) How big is Chris Christie's Asshole?
I dunno, how big is Trump?

10)Where would Chris Christie be most comfortable if he were ever elected President?
In the Oval Office.

11)How do we know that Chris Christie is an environmentalist?
He's doing his best to preserve blubber.

12)In what way is Chris Christie's trying to take better care of himself.
He's making it a point to drink eight bodies of water a day.

13)How are Chris Christie, a gullible person, and a hooker alike?
None of them has ever found anything too big to swallow.

14)Why does Chris Christie support Trump?
Trump's hair looks like orange cotton candy to him.

15)What is Chris Christie's belt size?
To infinity and beyond!

16)Why does Chris Christie no longer go to the Jersey shore?
Tired of being harpooned.

17) Why did Chris Christie hug President Obama after Hurricane Sandy?
Thought he felt a Twinkie in Obama's left inside coat pocket.

18)What causes Chris Christie to run screaming from the room?
Salad.

Got any more?  You no longer need to feel guilty.

(Again I apologize if anyone is offended. Christie deserves this; no one else does. This does not reflect any negative views about anyone else whatsoever.)

First of all - so funny and I'm ok now with poking fun at the dough boy.
Second of all - stop using white highlighter. We gave talked about this. It totally fucks up your mobile application view.
Thirdly- I can't help myself. 😘

I don't get it. I don't use white highlighter but sometimes the sections in bold seem to provide a white border on my cell phone and I guess your mobile applications. I'll try to use less bold and see what happens. Maybe Christie sat on the post?

I still haven't seen the typo, so it's all ok.

Oh, Perry. We all know you use white-out to fix typos. The screen on your laptop is covered with white patches.

Is it true Chris Christie plans to participate in the Winter Olympics?

Yes, he hopes to bring home the gold as the Huge Luge.

He also is a cinch to win the Men's Downhill. I mean, what other direction could he go?

C'mon folks, can we have a few more jokes about Mr. Christie? I can't be the only insensitive piece of garbage out there!

Who needs a wall between the US and MX when CC could block all entrances?

Bravo! And with the money the US would save on the wall we'd be in Fat City!