What's In Your Wallet? or Why, This Isn't You! 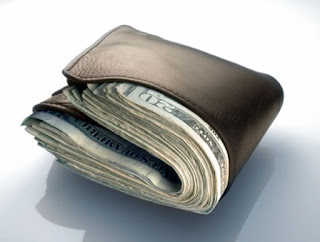 What's in your wallet?


I wonder if it's the same thing that's in mine.  If you're a Boomer, it probably is.

How did the picture of such an aged geezer get on my driver's license? I have theorized that there is a creature known as the Little Old Jewish Man or LOJM who leaps in front of camera any time I have a picture taken. If there is no LOJM, than the distorted and unappealing image upon the card may be the result of atmospheric disturbances, global warming, or some other bizarre phenomenon that is right now being over reported on CNN.

Since my driver’s license is used frequently for ID purposes, I would expect to routinely hear these words from those whose job it is to scope it out:

But oddly enough I never seem to hear them at all.

"Umm, is that a picture ID you're asking for? I can give you lots of cards with my name on them.  Ah, this is one from Adams Warehouse."

"I'm sure that opens all doors for you at Adams Warehouse, sir. But I do need a picture ID, like a driver's license."

"Well, I'm afraid there's a problem with my driver's license.  The picture on it  doesn't look like me. If I show it to you, you're going to say 'Why, this isn't you!' and you won't let me up in the building!'"

"How about I get someone to vouch for me instead?  I know a lot of people on Twitter."

"Without valid ID?! I want to see your badge number!"

Despite the fact that the picture on my card looks nothing like me, I never seem to get "Why, this isn't you!" Rather, I get admitted to wherever I wish to go, get to purchase whatever I want to purchase, and get permitted to do whatever it is I am seeking permission to do.

It isn't right. It isn't fair.

Since I so dislike that bogus picture on my driver's license, I took to carrying about a twenty year old license in which the man in the picture does indeed look just like me. Of course I carry it along with my current license since that is the one that must be shown when required.

"Certainly, Officer, but I'm afraid there's a problem with my license."

"Just hand me the cards, sir!" he growled.

Ouch!  I was hoping I could explain the situation before he sees the counterfeit face upon the counterfeit card, but no such luck. I forked over the cards and gritted my teeth.

"Why, this isn't you!" he bellowed, thrusting the driver’s license into my face.

And finally I heard those words!  At long last.

"You see officer, it's the LOJM!” I scrambled to explain.  “Or some cosmic disturbance that made the picture look much older than I really am!”

I looked at the license thrust in my face.  It was the one from 20 years ago.

I gave the officer the license that deceptively depicts me and he accepted it and gave me a whopping ticket. But the experience was not a total loss. I did finally get to hear those golden words “Why, this isn’t you!”

Even if they were in response to a driver’s license dated 1996.

So what’s in your wallet?

Email ThisBlogThis!Share to TwitterShare to FacebookShare to Pinterest
Labels: Driver's License, humor, My Baby Boomer Life, the LOJM, what's in your wallet?

I don't look like my drivers license photo at the moment because I'm grinning, which is not what the face on the license looks like. Good one.

I just don't get it. For 45 years or so the picture always looked like me! What kind of cheap camera equipment is the Department of Motor Vehicles using these days?

I see you're still using your 1965 high school graduation picture on your blog and Facebook (and I assume online dating sites as well).

I actually look much more handsome on my driver's license photo than in person because I hired a much younger and more attractive man to jump in front of the camera as the DMV girl was snapping the picture. She was so enamored with the photo that she wanted to take an extra to tuck inside her bra. The young man agreed to posing one more shot under the condition that he got to tuck the photo in himself.

Personally, I tired of their adolescent behavior and left the DMV before a supervisor came over to break up their touchy-feely moment. But at least now I get the satisfaction of hearing, "Why, this isn't you!" when I hand someone my driver's license.

I actually think this comment is funnier than my post. Who wrote it for you? Because this isn't you!

Some guy just outside Philadelphia, but I wouldn't recommend him. He charges way too much, plus he gets all the pretty girls.

Personally I'm getting younger with age, at least that's the overall plan. 36 again and again and ... I really liked 36 as you may be able to tell. Woman are at an aging advantage with hair dye, hair extensions, spackle, Spanx, botulinum and dating or being married to LOBM, little old blind men.
La Señora

You're still too old for me.