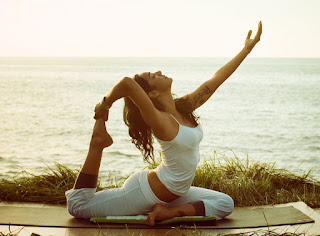 I have begun the ancient and honored practice of yoga.

Do I aspire to one day attain enlightenment and the transcendent state of being at one with the universe?

I’m taking yoga because I have a spine that’s shaped like the maze in a game called Help Explorer Sam Find his Way to the Magic Talisman of Bloth. So I wended my way to Yoga Pagoda - which likely requires less wending than wending my way to the Talisman of Bloth - and signed up.

Yoga Pagoda possesses an ethereal incense and Eastern music suffused atmosphere that reminded me pleasantly of the 60's, which unfortunately also reminded me that the only 60's I’m dealing with anymore are the ones that feature Medicare in the middle.

Scheduled for Gentle Yoga, which is  something like Yoga-with-Training-Wheels, I was instructed to "take a mat, a blanket, and two blocks," and go to the room in the back, which made me feel comfortable. With a mat, blocks, and a blanket in hand, could milk and cookies be far behind?

In the back room there were about twenty people busily unfurling mats and getting ready for the class, mostly young to middle-aged women and a sprinkling of men, amongst all of whom I was probably the oldest one there.

The oldest one there.

Not a particularly transcendent enlightenment to begin the epic journey to becoming one with the universe.

Or even to getting on a first name basis with it.

The leader of the group, an attractive young woman in absolutely terrific shape, began leading us though the assumption of various body positions called poses.

Some are simple like the Tabletop Pose, in which you get on hands and knees and form a table top with your back and a waiter comes along and sets the table and welcomes two guests who order Chablis and Veal Picante. This last part didn't actually happen but I assume it does in the more advanced classes.

There are many other poses like Child’s Pose, Downward Facing Dog Pose, and Fuck-Over Perry Pose.  I don’t believe this is the official name of that last pose but by class’ end all but the kindest of my yoga mates had readily adopted it as such.

Hopefully yoga will prevent my back from morphing into a Philadelphia soft pretzel and keep me tall enough so I can at least go on almost any ride I choose at Disneyworld.

And should I also get myself on a first name basis with the universe, well, it’s always good to make a new friend.

Perry, that's funny....I just started Yoga a few weeks back as well. I hope to recapture some of my flexibility and reduce the excessive orchestra of clicks, snaps and pops every time I get out of bed or push myself off of the couch. So far, I really enjoy the discipline and the "me time." I am lucky not to be the oldest in my class. I am even luckier not to be the first one to fart in every class....Namaste !!

I am unlucky in both respects you mentioned above, Jay. Watch out for that "Fuck Over, Perry!"

Good for you, Perry. I'm glad you're getting out and exercising. I'd heard that people were accusing you of being a poser, but I didn't know they meant it literally. Perhaps one of your cute young classmates will invite you over to serve as a coffee table or ottoman at her next dinner party.

As far as being the oldest in your class, you may as well get used to it. The same thing happened to me at Toastmasters. I'm considered the Mark Twain of the group, whereas they probably think of you as Methuselah.

If one of the young girls invited me over I would turn into a coffee table from fright as to what to do. And a lousy looking coffee table as well. I'm not usually considered the Methuselah of the group, but more like the William Frawley. Of course they only know William Frawley from reruns of "My Three Sons," but they get the picture. Most of them tell me they preferred William Demarest anyway.